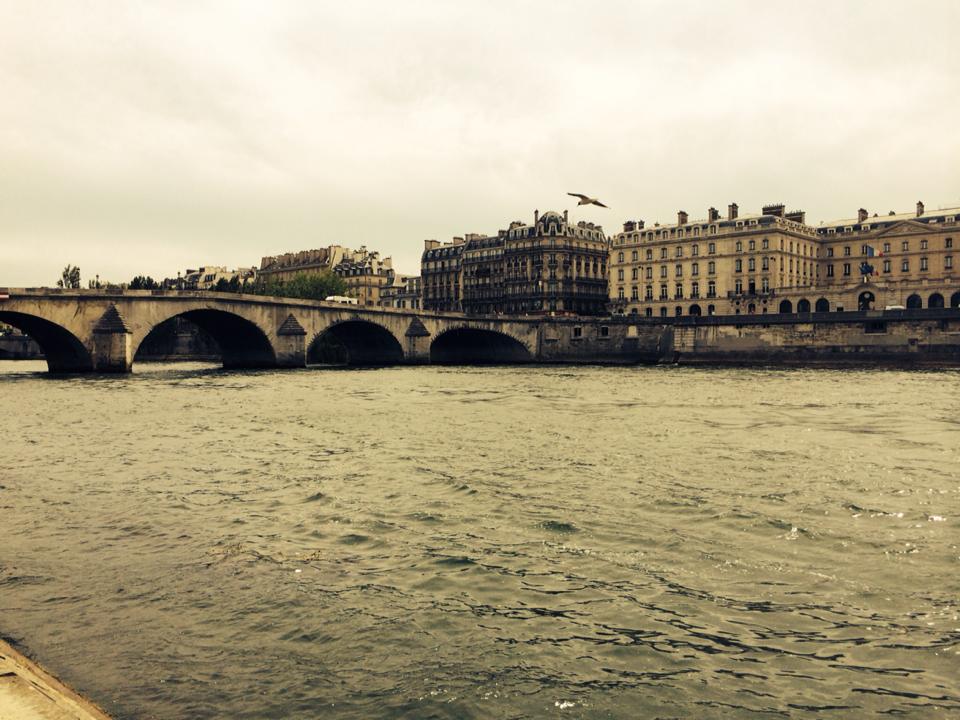 The Seine River in Paris. The river was a fascination for Joyce, and he hybridized the Seine and the Liffey, among many others, in Finnegans Wake. Photo by Jasmine Mulliken 2014.

Paris, or France in general, only appears in three stories in Dubliners, but in those three stories, the references number 18. Here they are, in “After the Race:”

“Now and again the clumps of people raised the cheer of the gratefully oppressed. Their sympathy, however, was for the blue cars — the cars of their friends, the French.The French, moreover, were virtual victors. Their team had finished solidly; they had been placed second and third and the driver of the winning German car was reported a Belgian. Each blue car, therefore, received a double measure of welcome as it topped the crest of the hill and each cheer of welcome was acknowledged with smiles and nods by those in the car. In one of these trimly built cars was a party of four young men whose spirits seemed to be at present well above the level of successful Gallicism: in fact, these four young men were almost hilarious” (42).

“They were not much more than acquaintances as yet but Jimmy found great pleasure in the society of one who had seen so much of the world and was reputed to own some of the biggest hotels in France” (43).

“The Frenchmen flung their laughter and light words over their shoulders and often Jimmy had to strain forward to catch the quick phrase” (44).

“At the control Segouin had presented him to one of the French competitors and, in answer to his confused murmur of compliment, the swarthy face of the driver had disclosed a line of shining white teeth. It was pleasant after that honour to return to the profane world of spectators amid nudges and significant looks” (44).

“Jimmy, whose imagination was kindling, conceived the lively youth of the Frenchmen twined elegantly upon the firm framework of the Englishman’s manner” (46).

“Riviere, not wholly ingenuously, undertook to explain to Jimmy the triumph of the French mechanicians” (46).

“They drank Ireland, England, France, Hungary, the United States of America. Jimmy made a speech, a long speech, Villona saying: “Hear! hear!” whenever there was a pause” (47).

“–It’s not so beautiful, you know. Of course, it is beautiful…. But it’s the life of Paris; that’s the thing. Ah, there’s no city like Paris for gaiety, movement, excitement….” (76)

“–Everything in Paris is gay, said Ignatius Gallaher. They believe in enjoying life — and don’t you think they’re right? If you want to enjoy yourself properly you must go to Paris. And, mind you, they’ve a great feeling for the Irish there” (77).

“–Tell me, he said, is it true that Paris is so… immoral as they say?

Ignatius Gallaher made a catholic gesture with his right arm.–Every place is immoral, he said. Of course you do find spicy bits in Paris. Go to one of the students’ balls, for instance” (77).

In the adolescence story, France is used as a general nationality for Jimmy Doyle’s friends, and in the maturity story, Paris insinuates the exotic, the unreachable, the intriguingly immoral opposite of Chandler’s existence in Dublin. In the public life story, France is mentioned “awkwardly,” in true Gabriel fashion, as he defends his increasingly apparent disinterest in Ireland to Molly Ivors. The author shared Gabriel’s tenuous relationship with the country, and it was this relationship that incited him exile himself to the continent prior to writing “The Dead.” Joyce lived in Paris for twenty years, but not until 1920, six years after the publication of Dubliners and sixteen years after the letter in which he announces that he was working on the “series of epicleti.” He had, however, spent time in Paris as a medical student, observing the “gaiety, movement, excitement” and spicy students’ balls to which Gallaher refers. And the movement and excitement  translate into the Futurist overtones of “After the Race,” a story based on the 1903 Gordon Bennett cup race in Ireland. Joyce had, earlier that same year, published his essay “The Motor Derby: Interview with the French Champion” in which he predicted that Henri Fournier would be a favorite in the July race.

Early film footage shows Joyce in the streets of the city he came to love and which he only left because of the invasion of the Nazis in 1940.