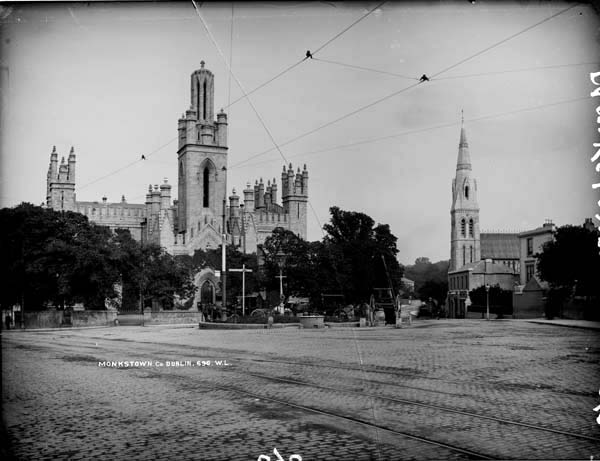 Overhead tram lines are visible in this photograph of the square in front of the Monkstown Church of Ireland, photographed by Robert French between 1865 and 1914. From the digitized Lawrence Photograph Collection at the National Library of Ireland.

Monkstown, a suburb of Dublin, is approximately 6.5 miles (10.5 km) southeast of the city center. It sits on the coast of the Irish Sea, nearDún Laoghaire, which was Kingstown at the time James Joyce wrote “The Dead,” the only story in Dubliners that references Monkstown. In that final story of the collection, Monkstown is identified as the home of Gabriel and Gretta Conroy, the story’s main characters who are attending Kate and Julia Morkan’s annual Christmas-season dinner and musical exhibition:

“–Gretta tells me you’re not going to take a cab back to Monkstown tonight, Gabriel, said Aunt Kate” (180).

In The History of the County of Dublin, John D’Alton describes Monkstown as “a locality, not perhaps in itself either town or village, but surrounded by elegant villas, noble demesnes, and tasteful bathing lodges, and withal on the threshold of Kingstown” (864). This 1838 history, published in Dublin, chronicles, among other things, the establishment of Monkstown, an area known historically as Carrickbrennan. The earliest record D’Alton describes, in a style almost Finnegans-Wake-ean, is from 1174:

“In 1174 King Henry the Second, by charter, confirmed to the Abbey of the Blessed Virgin all their lands in Carrickbrennan, (the more ancient name of this locality,) Carrickvecon, &c., with all their appertenances, and all shipwrecks that might happen on their lands, together with soc and sac, tol and them, infangenthef and outfangenthef, and all liberties and free customs” (867).

After the sixteenth-century dissolution of the monasteries, much of the land of Monkstown, including three turrets, a monastery, orchard, abbey, and cemetery, were granted in 1546 to John Travers, Master of Ordnance. In 1638 the castle was built, and its ruins are still in tact. According to the Castle Hunter blog, which photographs and briefly describes many Irish ruins, this particular castle’s ruins, “sitting on the edge of a roundabout [, …] are the last thing you would expect to come across” in the area.

By 1640, through marriage and inheritance, Walter Cheevers had possession of most of these lands, but, according to D’Alton’s history, he was “indicted for adhering to the rebels in 1641” (869), and the Irish papist was exiled for a time to County Galway before being restored to his property in Monkstown. Thus, like Gretta in “The Dead,” who is from Galway, this Monkstown resident bridges west and east Ireland. 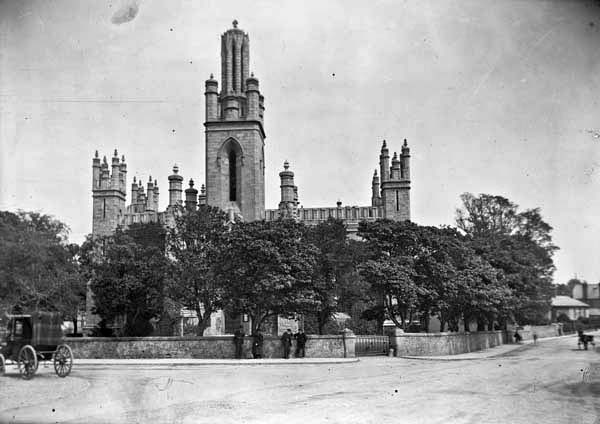 Monkstown Church, exterior, Monkstown, Co. Dublin. Photograph by Eason and Son, between 1900 and 1939. From the digitized Eason Photograph Collection at the National Library of Ireland. This is not the original abbey connected to the churchyard, but a rebuild of a church originally established in the area in 1789.

One of the primary historical features of Monkstown is its churchyard, which is the burial site for many shipwreck victims, including “the unfortunate officers and soldiers of the 97th Regiment, who perished in the … Rochdale transport-ship in 1807” (D’Alton 865).  The Rochdale, as well as the Prince of Wales, both crashed into the coastal rocks during a storm on November 18, 1807, and many of the wrecks’ victims washed onto shore in Monkstown. The wreck prompted the building of the nearby Kingstown Harbour (now Dún Laoghaire Harbour). In his description of the cemetery and its monuments, D’Alton cites Joseph Addison, who “on a similar occasion” of reading names on tombstones, commented “when I see kings lying by those who deposed them, when I consider rival wits placed side by side, or the holy men that divided the world with their contests and disputes, I reflect with sorrow and astonishment on the little competitions, factions, and debates of mankind” (qtd. in D’Alton 866). Like Gabriel at the end of “The Dead,” who imagines “the lonely churchyard on the hill where Michael Furey lay buried” and who watches the “snow falling faintly through the universe and faintly falling, like the descent of their last end, upon all the living and the dead” (223-24), D’Alton and Addison were struck by the smallness of humanity against the imposing monolith of history. 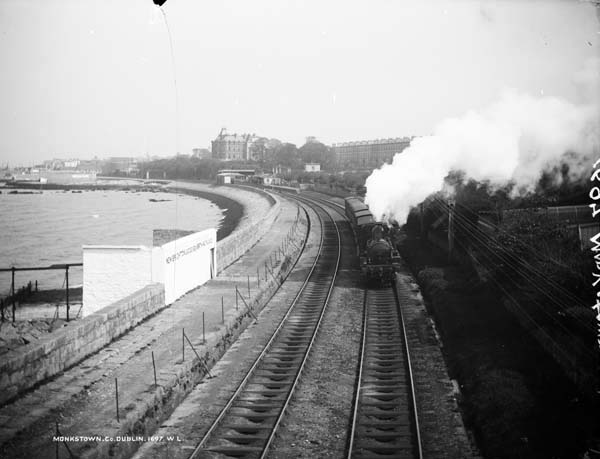 A train moving through Monkstown, 1880-1900. The photograph by Robert French is part of the Lawrence Photograph Collection at the National Library of Ireland,

Perhaps the most important historical developments for Monkstown was its railroad, which, in 1837, connected the area to the Dublin city-center and established it as a suburb of the city. The distance between the bustling center and the seaside neighborhood was now easily traversed. In fact, the young men in “After the Race” travel by train from Westland Row station to Kingstown, just a bit further from Dublin than Monkstown, “in a few seconds, as it seemed to Jimmy” (47). But by the time the Morkans’ party was winding down, the trains would most likely have stopped running, and according to late-nineteenth-century Eaton’s Diaries, trams only ran generally from about 8:30am to 11pm. The only method of transportation available to Gabriel and Gretta for a return home would have been a private cab.

Salthill Railway station, people, including girl with pram, Monkstown, Co. Dublin. Photographed between 1860 and 1883. From the digitized Stereo Pairs Photograph Collection at the National Library of Ireland.

But instead of taking a cab home after the party, the Conroys have reserved a room at the Gresham, a nice hotel in Sackville (now O’Connell) Street in the city center. The reason seems plain enough when Gabriel replies to Aunt Kate:

“–No, said Gabriel, turning to his wife, we had quite enough of that last year, hadn’t we? Don’t you remember, Aunt Kate, what a cold Gretta got out of it? Cab windows rattling all the way, and the east wind blowing in after we passed Merrion. Very jolly it was. Gretta caught a dreadful cold” (180).

Gabriel’s concerns are logical given the circumstances of time and place. Don Gifford notes that the story is set sometime between January 2 and 6, 1904 (Gifford 110), and a cab ride to Monkstown from Usher’s Island quay would have taken the couple along the coast for part of their journey, where the “east wind blowing in” would have been from the Irish Sea. Not only is it winter, it’s also very late when the party ends and the guests finally leave. In fact, it’s actually morning when Freddy Malins stands outside hailing cabs for the departing guests:

“The piercing morning air came into the hall where they were standing so that Aunt Kate said:

Once they’re all outside, the cold and dark of the scene are re-emphasized:

“The morning was still dark. A dull, yellow light brooded over the houses and the river; and the sky seemed to be descending. It was slushy underfoot; and only streaks and patches of snow lay on the roofs, on the parapets of the quay and on the area railings. The lamps were still burning redly in the murky air and, across the river, the palace of the Four Courts stood out menacingly against the heavy sky” (212-13).

Even though Monkstown was closer than ever before because of its connections to the city by train, tram, and cab; the late hour, the chill of the season, and even possibly the holiday transportation timetables keep the couple in the urban center even though their thoughts turn to remoter locations like Galway and the Aran Isles and the Shannon Waves and the “children… [and] household cares” in Monkstown (214).

One Response to Monkstown