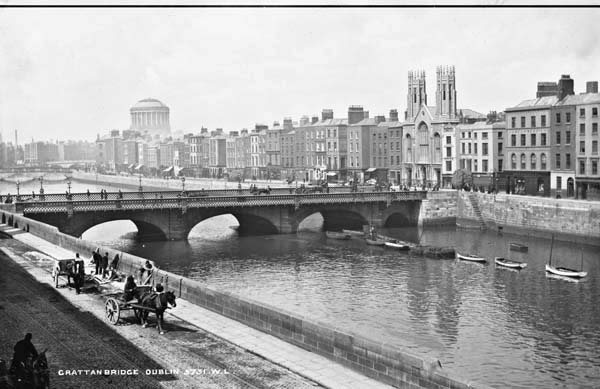 Grattan Bridge, Dublin City, Co. Dublin, photographed by Robert French between 1865 and 1914. From the Lawrence Photograph Collection at the National Library of Ireland.

Originally built in 1676 as Essex Bridge, the now-named Grattan Bridge connects Capel Street on the north side of the Liffey to Parliament Street on the south. At the time of its initial construction, it was the third bridge to span the Liffey. The first was the ca. 1014  Dubhghall’s Bridge, renamed and rebuilt several times over the centuries. When James Joyce wrote Dubliners, it was the Whitwort Bridge, and since 1928, it’s been called the Father Mathew Bridge. The second bridge was the Bloody Bridge, built in 1670, but by the time of Dubliners, it had also been rebuilt and was known as the Victoria & Albert Bridge. It’s now called the Rory O’More Bridge. According to the detailed history of the Dublin bridges in Michael Phillips and Albert Hamilton’s “Project History of Dublin’s River Liffey Bridges,” “[n]ame change appears to be a popular aspect of the Republic’s means of demonstrating change ‘from the old order’, and there also seems to be an apparent need for commemoration” (162). 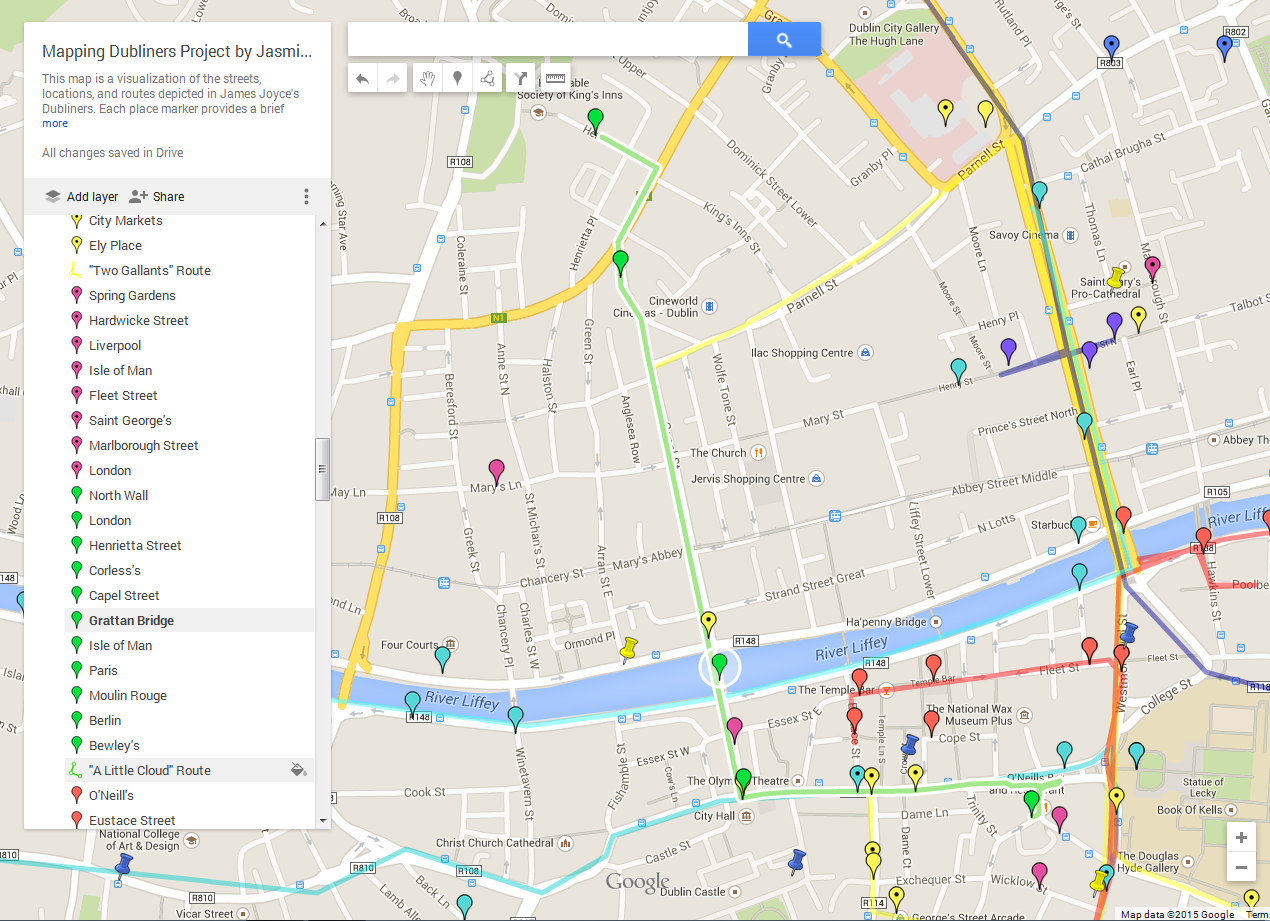 Screenshot of the map showing Little Chandler’s route in green and Grattan Bridge, marked by the highlighted green tag.

Grattan Bridge, the most logical of crossing points on Little Chandler’s route in “A Little Cloud,” was named after Henry Grattan when it was rebuilt between 1873 and 1875 by William J. Doherty. Grattan was an 18th-century Irish politician who was known for his oratory. He served both as a member of the Irish Parliament, where he opposed the 1800 Act of Union, and then later as a member of the British Parliament in London. Appropriately, the reference to Grattan Bridge, then, adds an additional layer to the tension between England and Ireland already at work in the story. Little Chandler is on his way to meet his friend Gallaher, who is visiting from England. As we learn at the story’s opening, Gallaher had left Ireland for good eight years before, and Chandler is anticipating the reunion with a mix of hopefulness and dread. He ponders all this before leaving his office in King’s Inn and as he walks south toward the Liffey, which he crosses at Grattan Bridge:

“As he crossed Grattan Bridge he looked down the river towards the lower quays and pitied the poor stunted houses. They seemed to him a band of tramps, huddled together along the riverbanks, their old coats covered with dust and soot, stupefied by the panorama of sunset and waiting for the first chill of night bid them arise, shake themselves and begone” (73).

The spot is one of many where Little Chandler pauses to consider his home city in anticipation of the inevitable comparisons he will soon be imagining when he meets his expatriate friend. And though Chandler seems disenchanted with the view, the description of what he sees preserves a nonetheless romantic cast, a fitting lens for his obsession with “express[ing] the melancholy of his soul in verse” (84). The description of the houses and the riverbanks is immediately followed by:

“He wondered whether he could write a poem to express his idea. Perhaps Gallaher might be able to get it into some London paper for him. Could he write something original? He was not sure what idea he wished to express but the thought that a poetic moment had touched him took life within him like an infant hope. He stepped onward bravely” (73).

As he continues southward across the bridge toward the more cosmopolitan south bank, toward Corless’s where “he had heard that the waiters…spoke French and German” (72), he begins feeling less tied to the “dull inelegance” (73) of Capel Street and, indeed, Dublin altogether. As he crosses the Liffey, he becomes braver and more adventurous:

“Every step brought him nearer to London, farther from his own sober inartistic life. A light began to tremble on the horizon of his mind. He was not so old—thirty-two. His temperament might be said to be just at the point of maturity” (73).

Essentially, the bridge over the Liffey is a geographical parallel to Little Chandler’s psychological geography as he emerges from what he considers the confines of his home to new opportunities in new lands.

Near the end of the story, after meeting Gallaher and while he’s watching his own child at home, feeling like “a prisoner for life” (84) he reflects back on the scene at the bridge:

“There were so many things he wanted to describe: his sensation of a few hours before on Grattan Bridge, for example” (84).

It isn’t clear which side of the Liffey Chandler lives on, but his return to his thin-walled little house where he feels imprisoned suggests that he may be back on the north side again. And it’s here that he returns, though with more melancholy and less hope, to his dreams of being a poet. That desire and its potential success has become associated, for him, with the moment on the bridge. If the north side of the river represents his Irishness and the south his potential success as a London-published poet, the bridge is a geographical and structural symbol of his poetic identity. Just after he crosses the bridge, in fact, he ruminates on his niche:

“The English critics, perhaps, would recognise him as one of the Celtic school by reason of the melancholy tone of his poems; besides that, he would put in allusions. He began to invent sentences and phrases from the notice which his book would get. Mr. Chandler has the gift of easy and graceful verse…. wistful sadness pervades these poems…. The Celtic note. It was a pity his name was not more Irish-looking. Perhaps it would be better to insert his mother’s name before the surname: Thomas Malone Chandler, or better still: T. Malone Chandler. He would speak to Gallaher about it” (74).

His poetry requires his connection to and even imprisonment in Ireland, but his publication depends on his ability to escape it. The in-between, the bridge, is his best hope.

One Response to Grattan Bridge