Grafton Street in Dublin today is a chic, bustling  shopping lane. In the time of James Joyce, it was, as Don Gifford describes, “a street of…fashionable shops” (54). Apparently, it has sustained its air of lively, happening nowness over the century and continues to be an energetic place to stroll. And stroll do the many characters in Dubliners. Grafton Street pops up five times in the book: twice each in “After the Race” and “Two Gallants,” and once in “Grace.” 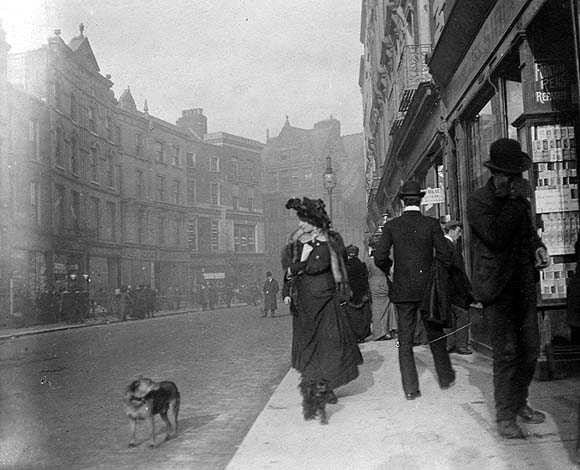 In “After the Race,” Grafton Street is the setting of much energy and society. The references to the street work to reify the “rapid motion through space” (44) that characterizes the story’s mood. First, it’s mentioned as a place in the distance, an exit direction for the car after Jimmy and Villona disembark and begin walking towards Jimmy’s father’s house:

“The car steered out slowly for Grafton Street while the two young men pushed their way through the knot of gazers” (45).

After the young men change clothes, they go back out into the busy Dublin evening and eventually meet their friends Segouin and Riviere, from the car, and run into Riviere’s friend Farley, a portly American:

“At the corner of Grafton Street a short fat man was putting two handsome ladies on a car in charge of another fat man. The car drove off and the short fat man caught sight of the party” (47).

Now a party of five, the young men eventually leave the bustle of the city center and head out to make their own bustle in private on Farley’s yacht, which is waiting in Kingstown Harbour.

Grafton Street has a completely different feel to it in “Two Gallants.” While still a crowded and vibrant locale, it’s in strong opposition to what Lenehan feels as he traverses its length from Stephen’s Green to College Green after which he continues  north all the way to Rutland Square:

“He walked listlessly round Stephen’s Green and then down Grafton Street. Though his eyes took note of many elements of the crowd through which he passed they did so morosely. He found trivial all that was meant to charm him and did not answer the glances which invited him to be bold. He knew that he would have to speak a great deal, to invent and to amuse, and his brain and throat were too dry for such a task” (56).

After wandering, eating peas, and stopping to talk to some friends he has encountered, he finds Grafton Street again:

“He left his friends at a quarter to ten and went up George’s Street. He turned to the left at the City Markets and walked on into Grafton Street. The crowd of girls and young men had thinned and on his way up the street he heard many groups and couples bidding one another good-night” (58).

It is once the action around him begins to die down that Lenehan begins to perk up, going so far as to “set off briskly,…hurrying for fear Corley should return too soon” (59). Once he arrives at the meeting spot, “[h]is mind became active again.” 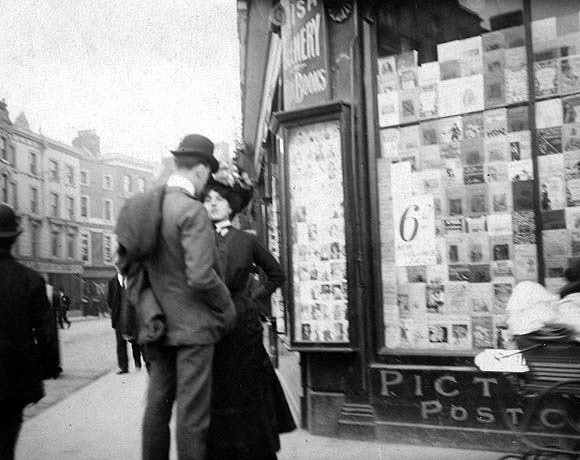 If the reference to Grafton Street parallels the mood of “After the Race” and juxtaposes that of “Two Gallants,” it does something much more complex in “Grace.” In this story, Grafton Street is the location of the bar in which Mr. Kernan has his accident. It is this accident that sets in motion the events of the story. Once he is found, blood tricking from his mouth, at the foot of the stairs to the bar’s lavatory, he is carried up and laid on the floor of the bar. His friend Mr. Power comes to his aide and takes him outside:

“When they came out into Grafton Street, Mr. Power whistled for an outsider” (153).

The horse-drawn outsider finally delivers the two men to Mr. Kernan’s home in the Glasnevin Road, which isn’t exactly one road but a path by which one would get to the northwestern suburb. Mr. Kernan apparently lives somewhere along this path. The two locations are quite different of course. One is a central artery of the city, bursting with youth, money, and vitality; the other is a peripheral vein, quietly pulsing with family, beef-tea, and familiar “personal odour” (156). For Mr. Kernan, one is a dangerous place to be and the other a safe and nurturing place to be. Ironically, the public life story uses one of the most populous places in Dublin as a space that its main character cannot safely or successfully occupy.