“An Encounter” Route The Corner of Dame and George’s Streets

This week’s featured geographical reference is Gardiner Street. The street appears twice in Dubliners: once in “An Encounter” and once in “Grace.” In both cases, the reference is associated with a church located there:

“An Encounter:” “His parents went to eight o’clock mass every morning in Gardiner Street and the peaceful odour of Mrs. Dillon was prevalent in the hall of the house” (19).

“Grace:” “The transept of the Jesuit Church in Gardiner Street was almost full; and still at every moment gentlemen entered from the side door and, directed by the lay-brother, walked on tiptoe along the aisles until they found seating accommodation” (172).

According to two historical maps (1836 and 1883) from the David Rumsey Collection, there is only one church in Gardiner Street, and that is St. Francis Xavier, pictured above in photographs taken between 1880 and 1900. The image below shows a Google Earth street view shot of the church as it appears today. 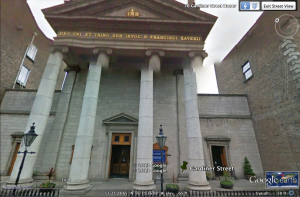 In “An Encounter,” the second story in Dubliners, Joe Dillon is described as having “a vocation for the priesthood” (19), but his behavior in the story suggests just the opposite temperament, and it is only his parents, not Joe, who are described as attending mass. In “Grace,” the second to last story in the collection, Mr. Kernan feels out of place at the church until he begins to recognizes the familiar faces of his friends (173).

Although the two references connote very different circumstances, the play between the two stories is, at the very least, intriguing. The stories both contain priests (Father Butler* aka “Bunsen Burner” in AE and Father Purdon in G); Leos (Joe’s brother Leo Dillon in AE and Pope Leo in G), secondness (AE is the second story and G is the second-to-last story), and the circumstance of a parent of two boys attending a church in Gardiner Street. In fact, we might even see the Kernans as older versions of the Dillon parents. The Dillons have two young sons, Joe and Leo, and the Kernans have two grown sons who live in Glasgow and Belfast. Though neither of the Kernans’ sons is a priest, the one in Glasgow is “in a draper’s shop,” a location recalling the residence of the problematized priest in “The Sisters.”

Untangling Joyce’s network of characters and versions of characters is an endlessly stimulating process, and this project’s map of geographic references certainly helps in providing leads in this perpetual puzzle!

25 July 2013 update: Thanks to Shelby Cook (@ReadingJoyce) for pointing out that this church is also the location of Stephen’s retreat in A Portrait of the Artist As a Young Man:

U can visit the church and see red stained glass over door that let in the “dull scarlet light” at the retreat: @MapDubProj @ReadingJoyce

One Response to Gardiner Street