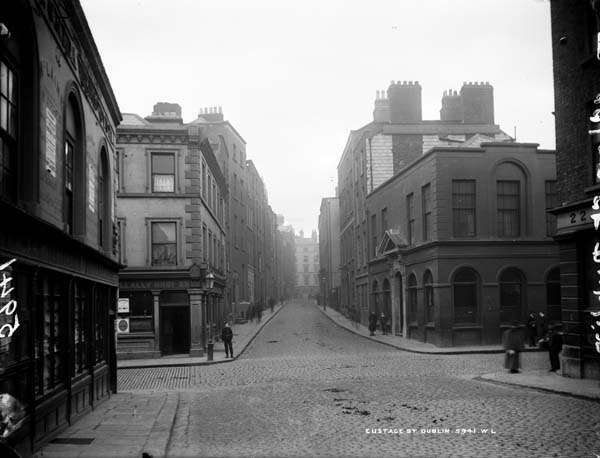 Eustace Street, which appears only in “Counterparts,” is the street where Farrington’s office is located. He is a copyist, or a scrivener, like the famous Bartleby, who, like Bartleby, has had enough of taking orders from his boss. But unlike Melville’s scrivener who simply responds to any request with “I would prefer not to,” Farrington acts out quite emotionally throughout the story in response to slight after slight. The first of these slights come from his boss, Mr. Alleyne of Crosbie & Alleyne, solicitors. (Thom’s 1904 directory lists a C.W. Alleyne at the corner of Eustace and Dame Street, though as Gifford notes, there is no Crosbie listed on the premises [Gifford 74]). Alleyne calls Farrington into the office where he reprimands him for not finishing a copy on time, giving excuses for “shirking work,” and taking too long on his lunch breaks (87).

Alleyne tells Farrington to finish the copies immediately, to which he responds “Yes, sir.” But after writing out a few words, Farrington decides to get a porter to get his motivation up. He heads to O’Neill’s shop and by the time he returns to the office,

“Darkness, accompanied by a thick fog, was gaining upon the dusk of February and the lamps in Eustace Street had been lit” (89).

Eustace connects Dame Street on the south, a busy thoroughfare containing shops, banks, and other financial establishments, with Temple Bar on the north, an area that includes places like Terry Kelly’s pawn office in Fleet Street and the employer of Jack Mooney in “The Boarding House,” who is “a hard case,” and as Gifford suggests, could be involved in the “debt-collection side of a commission agency” (Gifford 63). In other words, Eustace Street connects ideas of institutionalized money with perhaps ‘hard-got’ money. 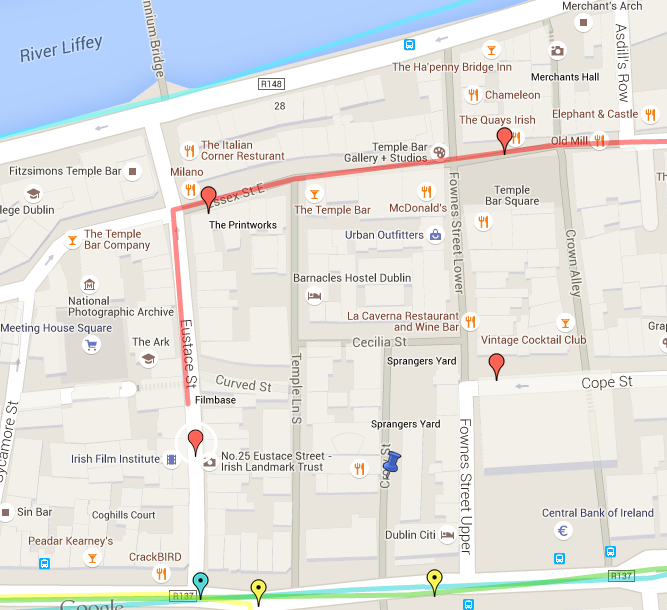 Screenshot from the Google map showing Eustace Street and the beginning of Farrington’s route.

Eustace Street itself has an eclectic history. One report, which chronicles the history of 17 Eustace Street, explains, “Eustace Street can be considered quite unique as throughout its history it accommodated such a broad range of occupants from a Lord Mayor of Dublin, Sir Thomas Blackhall, through to merchants, goldsmiths, gunmakers and solicitors” (Somerville-Woodward & Morris 3).

One particular implication of the reference to the street, though, is political. According to one of several historical accounts of the Temple Bar area, although “Eustace Street was named after Sir Maurice Eustace, Speaker of the House of Commons and Lord Chancellor, who died in 1665 and whose house and gardens stood on the site of this street,” it was also where the Eagle Tavern was located. This tavern was the setting for “[t]he inaugural meeting on 9 November 1791 of the Dublin Society of United Irishmen … with Simon Butler as chairman and Napper Tandy as secretary.” The United Irishmen, led by Wolfe Tone was prominent in the 1798 rebellion that sought to end British rule in Ireland.

It’s possible that the street, with its republican connotations is, as a passageway, itself a kind of rebellion by Farrington against Mr. Alleyne. The narrator refers twice to Alleyne’s North of Ireland accent, which may indicate he has unionist leanings. The description appears, in fact, in the opening lines of the story as Alleyne is “furiously” calling for the scrivener:

“The bell rang furiously and, when Miss Parker went to the tube, a furious voice called out in a piercing North of Ireland accent:

The description appears again in the context of Farrington mocking Alleyne, which he does throughout the night to his friends:

“But they had never pulled together from the first, he and Mr. Alleyne, ever since the day Mr. Alleyne had overheard him mimicking his North of Ireland accent to amuse Higgins and Miss Parker: that had been the beginning of it” (92).

Much of the tension and frustration Farrington experiences seem to be a kind of embodiment of the frustration Ireland as a whole felt under the dictates of British rule. And indeed, later in the night, a London woman slights Farrington, another enactment of the British-Irish dichotomy symbolically fueling Farrington’s rage.

The hidden political connotations implied by the reference to Eustace Street only add depth to the story’s complex commentary of the frustrated Irish worker in a British economy.