Editor’s Note: The following is a guest contribution to the Mapping Dubliners Project. The author, Jennifer Jennings, composed and submitted this piece as a student in Dr. Amanda Sigler’s James Joyce course at Erskine College. 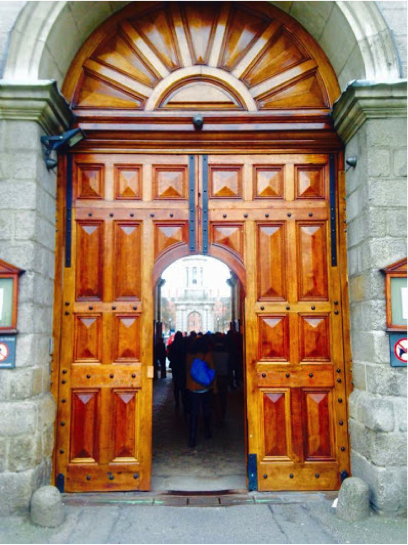 Though an important part of Dublin culture, Trinity College Dublin appears in various forms in only three of Joyce’s stories in Dubliners. In “After the Race,” Trinity, under the guise of “Dublin University,” is listed as one of the schools attended by Jimmy Doyle. In “Two Gallants,” Trinity is part of Corley and Lenehan’s route to meet the slavey. In “The Dead,” Trinity is mentioned twice: implicitly in reference to “The University Question,” a political conundrum in twentieth-century Dublin, and explicitly in reference to the college as a landmark in the cityscape. According to the Trinity College Dublin website, “Trinity is recognized for academic excellence and a transformative student experience.” However, without its unique and rich history, Trinity College would not exist as the university it is today.

Trinity has gone through several inceptions since its beginning in the twelfth century. According to Bruce Bidwell and Linda Heffer in their book The Joycean Way, the King of Leinster built the college as an Augustinian Monastery; however, the monastery dissolved in the sixteenth century and the land was appropriated by the city of Dublin (141-142). In Joyce Annotated, Don Gifford says that Elizabeth I used the land to found Trinity College and “further the cause of the Reformation in Ireland” (53). While Trinity College was founded as a Protestant school, the majority of Dublin’s citizens were Catholic, so the school’s intellectual opportunities were denied to the majority of Irish citizens. In fact, for a time Irish Catholic bishops forbade their parishioners to attend Trinity College because of its association with the Protestant domination (53). Gifford writes that while Irish Catholics did have the University College, Dublin, the early curriculum was so below the standards of other colleges that many considered it to have no power to award degrees or provide successful jobs for its students (117).

According to Bidwell and Heffer, Trinity’s main entrance is located on Great Brunswick (Pearse) Street and was built in 1760, destroying the Elizabethan architecture that once characterized the college. A fence separates the main campus from the public sidewalk, and at the main entrance there is a large clock that faces the Bank of Ireland (142). The reference to Trinity College in “Two Gallants” features the fence and the clock at the front entrance. Joyce writes, “As they passed along the railings of Trinity College, Lenehan skipped out into the road and peered up at the clock” (53). Bidwell and Heffer argue that Corley and Lenehan follow the path of the College Green and circle around the front of Trinity College to re-enforce Joyce’s use of circles in the story. These references to circles adumbrate the retrieval of the circular gold coin in the story’s climax. Despite its symbolic role in “Two Gallants,” Trinity’s role in “The Dead” is more nuanced.

In “The Dead,” Trinity College hovers behind Miss Ivors and Gabriel Conroy’s discussion of education. According to Gifford, Joyce’s reference to “The University Question” in “The Dead” marks a political shift in the conversation between Miss Ivors and Gabriel by providing something they can agree on. Joyce says, “When they were together again she spoke of the University question and Gabriel felt more at ease” (188). Gifford writes that “The University Question” deals with the debate amongst Dubliners about the establishment of a university that would provide an education equivalent to that of England and the continent and that would emphasize the Irish culture and Catholic tradition of Ireland (117). Presumably, Miss Ivors and Gabriel can agree that Ireland needs such a college; for Trinity College, while being sufficiently prestigious, did not meld this academic prestige with a Roman Catholic heritage in the early twentieth century. Only after Irish independence did a shift occur, and, by the 1990s, “80 percent of the undergraduates were from Roman Catholic families” (Fargnoli and Gillespie 218).

Bidwell, Bruce and Linda Heffer. The Joycean Way: A Topographic Guide to ‘Dubliners’ & ‘A Portrait of the Artist as a Young Man’ with Maps and Photographs. Baltimore: Johns Hopkins University Press, 1982. Print.

Fargnoli, A. Nicholas and Michael Patrick Gillespie. James Joyce A to Z: The Essential Reference to the Life and Work. New York: Facts on File, 1995. Print.

Tagged with: after the race • the dead • two gallants