Phoenix Park is a 1752-acre urban park just north of the River Liffey in the west part of Dublin near the village of Chapelizod. One of the largest capital-city parks in Europe, it houses in its walls not only a zoo, grass fields, woods, sports grounds, a raceway, walking and biking trails, and wild deer descended from those introduced in 1660 when the park was established by the Duke of Ormonde as a hunting ground, but also the residences of both the President of Ireland and the U.S. Ambassador, the headquarters of the Garda Síochána (Irish police), and the National Ambulance Service College (previously the Hibernian Military School “incorporated in 1769,” Joh D’Alton explains, “for maintaining, educating, and apprenticing the orphans and children of soldiers in Ireland” [529]). 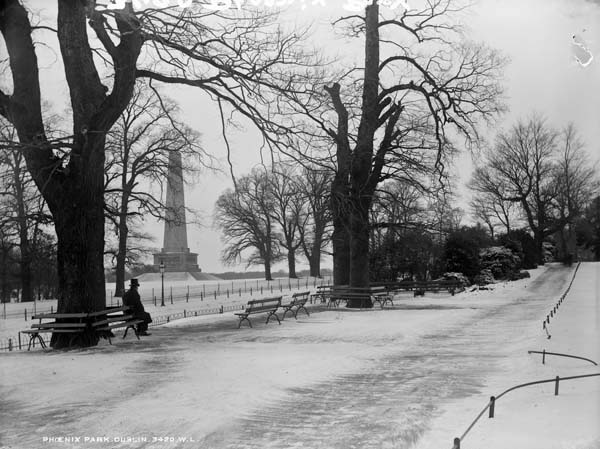 Phoenix Park, Dublin City, Co. Dublin, photographed by Robert French between 1865 and 1914. The photo shows the Wellington Monument, one of several statues and monuments in the park, in the snowy background. From the National Library of Ireland’s digitized Lawrence Photograph Collection.

Though Phoenix Park is never mentioned by name in Dubliners, “the Park,” the Parkgate, and locations within the park, like the Wellington Monument and Magazine Hill, are. The Wellington Monument, which stands just inside the park’s main entrance, appears in “The Dead” covered with snow and frost in Gabriel’s imagination, serving in part as an outdoor solitary and quiet contrast to the bustling of the party going on inside the Morkan home:

“Gabriel’s warm trembling fingers tapped the cold pane of the window. How cool it must be outside! How pleasant it would be to walk out alone, first along by the river and then through the park! The snow would be lying on the branches of the trees and forming a bright cap on the top of the Wellington Monument. How much more pleasant it would be there than at the supper-table!” (D 202)

But perhaps the most Phoenix-Park-centric story in Dubliners is “A Painful Case.” The main character, James Duffy, lives in Chapelizod, a village whose name (translated “Iseult’s Chapel”) emanates romantic connotations through its invocation of the Tristan and Iseult story. One of the village’s main roadways, which Duffy traverses, runs along the outside of Phoenix Park’s south wall. The park is referenced at two points in the story. It is the last place James Duffy meets Emily Sinico, a married woman with whom he has “become intimate” (D 110), after what he perceives to have been an awkward and dangerously romantic exchange; and it is where he returns, alone, to walk and think after reading the news of her sudden and disturbing death.

The first reference to the park is used as a kind of response to a near-moment of passion:

“The dark discreet room, their isolation, the music that still vibrated in their ears united them. This union exalted him, wore away the rough edges of his character, emotionalised his mental life. Sometimes he caught himself listening to the sound of his own voice. He thought that in her eyes he would ascend to an angelical stature; and, as he attached the fervent nature of his companion more and more closely to him, he heard the strange impersonal voice which he recognised as his own, insisting on the soul’s incurable loneliness. We cannot give ourselves, it said: we are our own. The end of these discourses was that one night during which she had shown every sign of unusual excitement, Mrs Sinico caught up his hand passionately and pressed it to her cheek.

Mr Duffy was very much surprised. Her interpretation of his words disillusioned him. He did not visit her for a week, then he wrote to her asking her to meet him. As he did not wish their last interview to be troubled by the influence of their ruined confessional they met in a little cakeshop near the Parkgate. It was cold autumn weather but in spite of the cold they wandered up and down the roads of the Park for nearly three hours. They agreed to break off their intercourse: every bond, he said, is a bond to sorrow. When they came out of the Park they walked in silence towards the tram; but here she began to tremble so violently that, fearing another collapse on her part, he bade her good-bye quickly and left her. A few days later he received a parcel containing his books and music” (D 111-12).

Chapelizod itself abounds with mythic and romantic connotations, and Phoenix Park, just by its name, also hints at the deep passion and romanticism repressed within Duffy’s “saturnine” and ordered persona (D 108). For even though “[h]e lived at a little distance from his body,” he lived in a place called Chapelizod and walked in a place called Phoenix Park. Don Gifford explains that “[t]he phoenix, a mythical bird, consumed by fire once a millenium yet reborn of its own ashes, is a traditional symbol variously of Christ and of the regenerative power of passionate love. For the Irish the Phoenix was also a symbol of the rebirth of Ireland as an independent (and ideal) nation” (86). Since Duffy is neither religious (he has no “church nor creed” [D 109] ) nor necessarily political (“No social revolution, he told her, would be likely to strike Dublin for some centuries” [D 111]), the strongest notion the phoenix symbol conveys would certainly seem to be that of “the regenerative power of passionate love.” And although Duffy sees the Parkgate cakeshop as a neutral or platonic space to meet, and perhaps it is inasmuch as it is at the gate between inside and outside Phoenix Park, the couple’s post-cakeshop stroll inside the park can be seen as a return to the potential of romantic love, a reigniting of the very passions he is trying to extinguish. In fact, despite the grey “cold autumn weather,” in Phoenix Park they wander like it’s summer, and even their goodbye is a rather dramatic and tragedic affair. 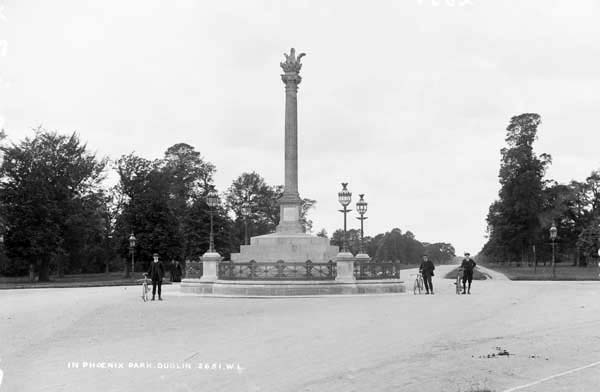 Phoenix Park, Dublin City, Co. Dublin, photographed by Robert French between 1865 and 1914. The photo features the Phoenix Column, which was erected in 1747 and is capped by a phoenix rising from ashes.

After Duffy reads of Mrs. Sinico’s death four years later, he is at first repulsed that he ever associated with someone capable of dying in such a way, and then finally starts to mourn the loss of “[h]is soul’s companion!” (D 115). Once the sadness begins, and he realizes how lonely she must have been and how lonely he too would continue to be, he goes back to the park:

“The night was cold and gloomy. He entered the Park by the first gate and walked along under the gaunt trees. He walked through the bleak alleys where they had walked four years before. She seemed to be near him in the darkness. At moments he seemed to feel her voice touch his ear, her hand touch his. He stood still to listen. Why had he withheld life from her? Why had he sentenced her to death? He felt his moral nature falling to pieces” (D 116-17).

As he stands on Magazine Hill, feeling guilty and alone, he observes two lovers and then hears Emily’s name in the sound of a passing train:

“He looked down the slope and, at the base, in the shadow of the wall of the Park, he saw some human figures lying. Those venal and furtive loves filled him with despair. He gnawed the rectitude of his life; he felt that he had been outcast from life’s feast. One human being had seemed to love him and he had denied her life and happiness: he had sentenced her to ignominy, a death of shame. He knew that the prostrate creatures down by the wall were watching him and wished him gone. No one wanted him; he was outcast from life’s feast. He turned his eyes to the grey gleaming river, winding along towards Dublin. Beyond the river he saw a goods train winding out of Kingsbridge Station, like a worm with a fiery head winding through the darkness, obstinately and laboriously. It passed slowly out of sight; but still he heard in his ears the laborious drone of the engine reiterating the syllables of her name” (D 117).

The connotations of passion implicit in the allusions to the Tristan and Iseult story and the Phoenix force the reader to at the very least consider the storm raging in Duffy as he recalls Emily Sinico’s life-force as a potential rebirth for him (if not an initial birth), one that allows him to embrace the full power of his longings, whether those longings be for writing, adventure, or romantic love. The rebirth comes as he stands on a hill in Phoenix Park, watching the “worm with a fiery head” winding away in the darkness “reiterating the syllables of her name.” Her life, which woke him from his solitude, made him face emotional intimacy; and her death, to which he believes he sentenced her, has the potential to be a kind of gambit necessary for him to finally realize his erotic, and even homoerotic, desire.

But like most of the characters in Dubliners, although the epiphany is just there, clawing at the heart, it is muted by guilt and the perception of his life as “an adventureless tale” (D 109).

Tagged with: a painful case • the dead