The Corner of Dame and George’s Streets

This week’s featured location is the intersection of Dame Street and George’s Street, where Lenehan of “Two Gallants” meets a couple of friends as he wanders the streets of Dublin waiting for Corley to finish a meeting with his girl:

“Then he turned into Dame Street. At the corner of George’s Street he met two friends of his and stopped to converse with them” (58).

The two friends are unnamed, but the group talks about Corley and a couple other common acquaintances identified as Mac and Holohan, both of whom Lenahan says he’s recently met in pubs. The conversation somewhat anticipates the mood of “Counterparts,” and aside from the fact that “Two Gallants” 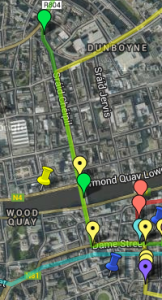 takes place in August and “Counterparts” in February, it might even be possible that the two friends Lenehan talks to at the intersection are versions of O’Halloran and Paddy Leonard on their way to Davy Byrne’s to meet Farrington and friends or perhaps versions of Higgins and Nosey Flynn having already left.

The corner also appears in “A Little Cloud.” In fact, it is at this corner that Little Chandler’s and Lenehan’s paths finally diverge after overlapping each other for several blocks. Lenehan and Chandler, each in his own solitude, wander from the intersection of Capel and Great Britain Streets to Dame Street to George’s Street. During this section of their paths, both men ponder their failings and lament their loneliness or missed opportunities. After Lenehan talks to his friends, he turns right down George’s Street while Chandler keeps going along Dame Street. Chandler actually walks too far along Dame Street “pursu[ing] his revery so ardently that he passe[s] his street and ha[s] to turn back” (74).