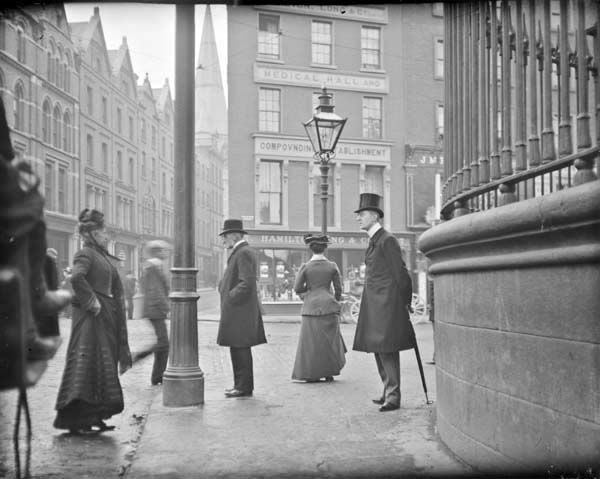 “[Man with umbrella standing at the junction of Nassau Street, Grafton Street and Suffolk Street],” photographed by J.J. Clarke between 1897 and 1904. The photo shows the view from Trinity College at Nassau and Grafton Streets, facing west down Suffolk Street which recedes into the background. From the National Library of Ireland’s digitized Clarke Photographic Collection.

Suffolk Street, a short lane connecting St. Andrew’s and Grafton Streets, appears briefly in “Ivy Day in the Committee Room” as the reported meeting spot of three ambiguously identified conspirators. According to Mr. O’Connor, there is something shady going on between some of the political set he and the rest of the men in the story know:

“There’s some deal on in that quarter, said Mr O’Connor thoughtfully. I saw the three of them hard at it yesterday at Suffolk Street corner” (127).

“The three of them” could be  any combination of the several people the men have been discussing during their early evening fireside chat. One member of the trio is almost certainly Alderman Cowley, who has just been mentioned as the reason Henchy couldn’t get the attention of the “shoeboy” who is supposed to be bringing the men beer. The second could be this young “shoeboy” or, as Henchy calls him “hop ‘o my thumb,” a seventeen-year-old politico in the making who downs a whole bottle of stout between running errands for canvassers and city officials. And the third might be Father Keon, the strange priest who spends suspicious amounts of time in Kavanagh’s with political bargainers. As discussed in greater detail in the Kavanagh’s article, that particular locale was noted as a wineroom where under-the-table deals were made between existing and aspiring politicians, and the symbolic value of a priest meeting there with a politician echoes the inextricable (rather then ineluctable) relationship between religious and political modalities in Joyce’s Ireland. 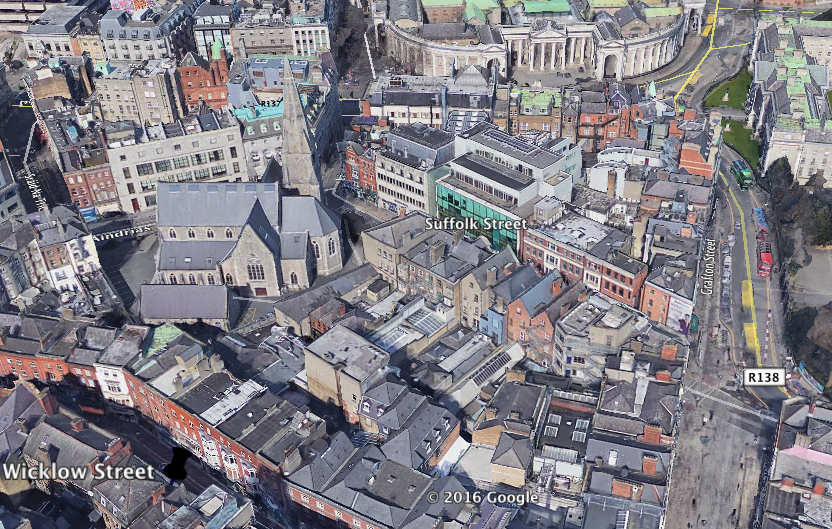 Earth version of the Dubliners map showing Suffolk Street, just above Wicklow Street, connecting St. Andrew’s Church on the west and Grafton Street on the east.

A block north of the committee room, Suffolk Street, like Kavanagh’s, reflects this confluence of two pivotal sectors in turn-of-the-century Dublin. But whereas Joyce’s use of Kavanagh’s highlights the relationship of politics and religion, Suffolk Street, in the context of the story, represents a symbiosis of religion and commerce. Connecting St. Andrew’s Street, home of St. Andrew’s Church, on its northwest end, and Grafton Street, a thoroughfare known for its retail and financial institutions, on its southeast end, Suffolk Street is a geographic symbol of the economics of religion and the religion of economics. Considering the connotations of St. Andrew’s and Grafton Streets as religious and economic spaces, Suffolk Street becomes an illustration of the thread connecting those two principles. The three men “hard at it” at the corner of Suffolk Street (which corner?) personify those connections while the geospatial markers map the relationship of these factors that fuel the political campaigns and legacies of all the figures in the story, from the fictional Tierney to the real Parnell to the alluded to Dublin mayor to Edward Rex.

Tagged with: ivy day in the committee room