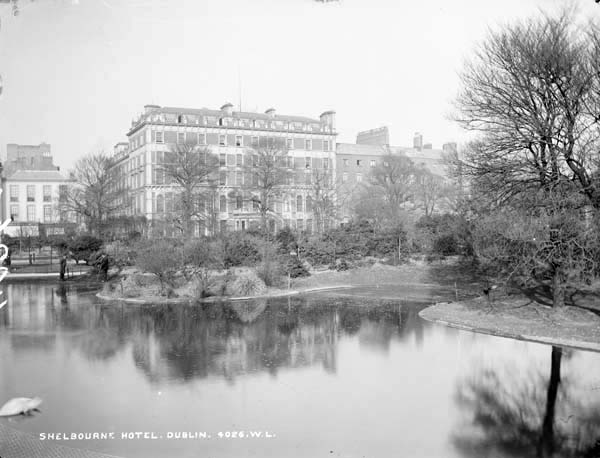 The Shelbourne Hotel as seen from within Stephen’s Green, photographed by Robert French between 1880 and 1900. Form the National Library of Ireland’s digitized Lawrence Photograph Collection.

The Shelbourne Hotel is a Dublin icon, and it makes sense that a work of literature named for and set in the city  would make use of its connotative potential as both a temporary or transitional abode in general and a symbol of the Ascendancy in particular. The hotel has been chronicled in at least two book-length studies, one in 1951 by Elizabeth Bowen and another in 1999 by Michael O’Sullivan and Bernardine O’Neill. It has a very detailed history, but in Joyce’s time, that history was less than a hundred years old and not yet outlined in print. What would have been clear to Joyce, though, at the very least, was that the hotel was situated in an area of Dublin known for its Georgian style and well-to-do residents. What would have also been known to Joyce  was the hotel’s typical clientele. Each year, explain O’Sullivan and O’Neill, the visiting viceregal court would “do the season” at Dublin Castle and would lodge during this time at the Shelbourne (8). Joyce would certainly also have been aware of the toponymic connotations of the hotel and would not have failed to seize the opportunity to imbue suggestive political overtones through the reference. The hotel, when it first opened in 1824, was named Burke’s, after the founder of the hotel and leasee of the property itself, which he added to and remodeled. But not long after its establishment, Burke changed the name to commemorate William, the Second Earl of Shelbourne, a decision that, according to O’Sullivan and O’Neill, fated it to be “umbilicaly linked, as it were, to the ascendancy” (7).

The Shelbourne appears in one Dubliners story, and it’s one that Donald Torchiana coincidentally argues “reflects the historic pomp and grandeur of Ascendency treacheries that cast long shadows behind the otherwise mean and stunted posturings of Corley and Lenehan near the end of Irish enslavement” (115).  The hotel is only mentioned once in “Two Gallants,” but it would have been a significant part of the setting as Lenehan passes directly in front of the facade at least four times during the story, and it would have been in his view many other times. In fact, it’s as interesting to explore where the hotel is not mentioned in the story as where it is mentioned. 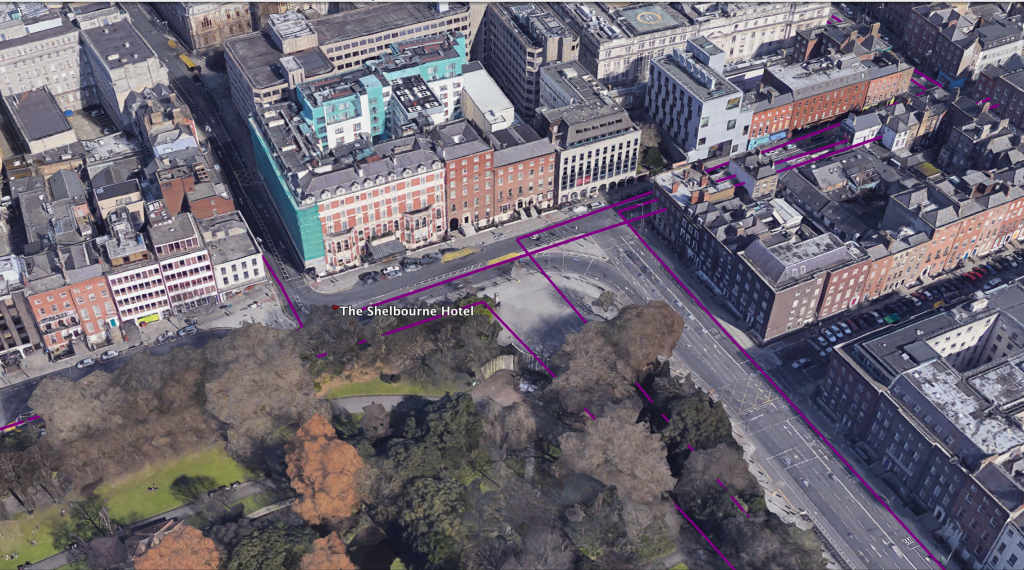 Screenshot of the Google Earth map showing the several traversals and re-traversals of Lenehan that take him in proximity of the Shelbourne Hotel.

“Two Gallants” opens with Lenehan and his friend Corley making their way from the north side of the city across the Liffey to the south. This movement in itself ambulates the shift in wealth from what was once the suburban north to the increasingly gentrified and affluent southern part of the city. They soon make their way down Kildare Street, where they encounter a harpist, a symbol of native Ireland, before reaching Stephen’s Green:

“They walked along Nassau Street and then turned into Kildare Street. Not far from the porch of the club a harpist stood in the roadway, playing to a little ring of listeners. He plucked at the wires heedlessly, glancing quickly from time to time at the face of each new-comer and from time to time, wearily also, at the sky. His harp, too, heedless that her coverings had fallen about her knees, seemed weary alike of the eyes of strangers and of her master’s hands. One hand played in the bass the melody of Silent, O Moyle, while the other hand careered in the treble after each group of notes. The notes of the air sounded deep and full.

The two young men walked up the street without speaking, the mournful music following them. When they reached Stephen’s Green they crossed the road. Here the noise of trams, the lights and the crowd released them from their silence” (54).

Before they cross the street, they would have been walking along the western side of the Shelbourne, but rather than narrate that figure looming on their left, Joyce describes the men as still caught up in the harpist’s tune as they walk “without speaking, the mournful music following them.” If, as Torchiana argues, Lenehan and Corley represent betrayers to Ireland, the harp music they’ve turned their backs on haunts them and perhaps even riddles them with guilt as they slip past the hotel. Furthermore, they cross the street in order to traverse the front of the hotel on the opposite side, perhaps in an effort to escape the guilt of association with Ascendency prosperity. To name the hotel at this particular point in the story would be to undercut the power of that guilt, and so it would seem Joyce is allowing the narrator to join with the harpist in admonishment of the young men’s betrayal. 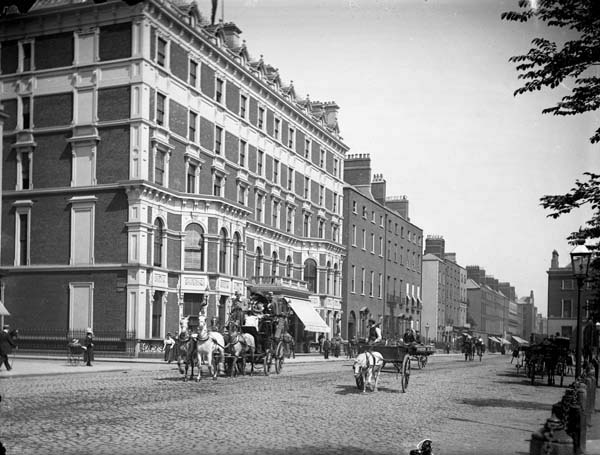 The Shelbourne Hotel as it would appear to Lenehan as he approaches it from the west to meet Corley. Photographed between 1865 and 1914 by Robert French. From the National Library of Ireland’s digitized Lawrence Photograph Collection.

The next non-explicated appearance of the hotel occurs after Corley has broken off to meet his “slavey,” and Lenehan doubles back to get a look at the pair. After walking nonchalantly down the east side of Stephen’s Green, he crosses the street and returns back up the other sidewalk to sneak a closer look. In front of him and slightly to the left, in the background of his view of the couple, must stand the Shelbourne Hotel. As an off-center backdrop, it frames the couple with connotations of Britain’s looming presence and predatory economics at the edge of daily Dublin life. It’s a telling image foreshadowing Corley’s use of the young Irish girl for her money.

And it is just after this sneaky exchange that the hotel is finally mentioned explicitly:

“Lenehan walked as far as the Shelbourne Hotel where he halted and waited. After waiting for a little time he saw them coming towards him and, when they turned to the right, he followed them, stepping lightly in his white shoes, down one side of Merrion Square. As he walked on slowly, timing his pace to theirs, he watched Corley’s head which turned at every moment towards the young woman’s face like a big ball revolving on a pivot. He kept the pair in view until he had seen them climbing the stairs of the Donnybrook tram; then he turned about and went back the way he had come” (56).

Halting and waiting is an appropriate action to take at a hotel, a site of transitional and expectant tarrying. And so also is leaving it, which Lenehan does when he proceeds to follow the couple. But to return “back the way he had come” reflects that annual aristocratic pilgrimage of the viceroy. The route he takes to follow and return packs in yet another political connotation as it takes him just in front of Duke’s Lawn on Merrion Street. And here again, Joyce’s non-reference to the hotel is coupled by a sense of despair and perhaps guilt:

“His gaiety seemed to forsake him and, as he came by the railings of the Duke’s Lawn, he allowed his hand to run along them. The air which the harpist had played began to control his movements. His softly padded feet played the melody while his fingers swept a scale of variations idly along the railings after each group of notes.

He walked listlessly round Stephen’s Green and then down Grafton Street” (56).

Again, the non-reference to the hotel, a structure which looms on his right more half a block even if he turns midway away from it to circumnavigate the entirety of Stephen’s Green to avoid passing its front door, is paired with a focus on the harpist’s tune. The memory of that moment of shame or guilt when he first approached the Shelboune returns again to Lenehan as he again passes the hotel. And he very well may decide to walk all the way “round Stephen’s Green” specifically to avoid passing its entirety to get to Grafton Street, a route that would have been four times shorter than the one he chooses.

The final appearance of the hotel is again unexplicated and occurs toward the end of the story. Lenahan is making his way back to the agreed-upon meeting place, which means he must again cross from the west side to the east side of Stephen’s Green. Instead of taking the southern route, he apparently steels himself for the necessary and more direct route along the square’s northern edge, right along the front of the Shelbourne Hotel. Rather than ruminating on the emotional or psychological turmoil of the past encounter with the building (perhaps he’s already forgotten it), the narrative seems to rush through the stretch between the College of Surgeon’s clock and Merrion Street, as if hoping to sneak quickly past the ghost of guilt with her noticing:

“He set off briskly along the northern side of the Green hurrying for fear Corley should return too soon. When he reached the corner of Merrion Street he took his stand in the shadow of a lamp and brought out one of the cigarettes which he had reserved and lit it” (59).

His emotional soundtrack is no longer guilt but fear that he might miss the fruits of his friend’s plot–the money. Although his hours of wandering offer moments of possible redemption for Lenehan, by the end, as he smokes his last cigarette, he does indeed seem to have become the betrayer Torchiana, and Boyle and Walzl before him, claims him to be.