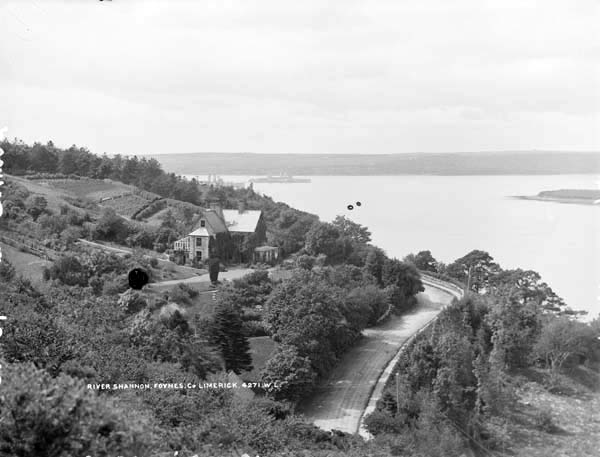 Shannon River, Foynes, Co. Limerick, photographed between 1865 and 1914 by Robert French. From the Lawrence Photograph Collection at the National Library of Ireland

The River Shannon, and more specifically, “the dark mutinous Shannon waves” make only one appearance in Dubliners, in the famous closing of “The Dead:”

“Yes, the newspapers were right: snow was general all over Ireland. It was falling on every part of the dark central plain, on the treeless hills, falling softly upon the Bog of Allen and, farther westward, softly falling into the dark mutinous Shannon waves. It was falling, too, upon every part of the lonely churchyard on the hill where Michael Furey lay buried. It lay thickly drifted on the crooked crosses and headstones, on the spears of the little gate, on the barren thorns. His soul swooned slowly as he heard the snow falling faintly through the universe and faintly falling, like the descent of their last end, upon all the living and the dead” (223-24).

The River Shannon is the longest river in Ireland and flows from County Cavan’s Cuilcagh Mountain in the north to Limerick City where it becomes an estuary and connects to the Atlantic Ocean in the west. Partially because of its enormous estuary, only about 45% of the River Shannon is freshwater.

According to legend, the Shannon got its name from Sinann (or Sionann), granddaughter of the Irish sea god. Sinann was drowned in the river when she attempted to eat a salmon from Connla’s well in order to gain knowledge. One version of the legend, as described by the Inland Waterways Association of Ireland, notes that “It was forbidden to women to come within the precincts of Connla’s wonderful well; but the beautiful Lady Sinann…longed to have also those more solid and masculine acquirements which were accessible at Connla’s well to the other sex only.” When she approached the well, the waters ran out and engulfed her, forming the River Shannon.

For much of Dubliners, the primary river reference is the Liffey. It is at least implicit in just about every story because it bisects the city in which every story is set. But if the Liffey is the river of the east of Ireland, emptying into the Irish Sea, the Shannon is the river of the west, feeding into the Atlantic. And at the end of “The Dead,” Gabriel imagines that “The time had come for him to set out on his journey westward.” His turn westward is very much effected by his wife Gretta’s story about Michael Furey and, arguably, her usurpation of the story of “The Dead” in general. From the beginning of the evening, Gabriel fights to steer moods and events his way, attempting to appease Lily’s challenges with a coin, fighting off the intellectual challenge introduced by Molly Ivors during lancers, revising his speech at the last minute in response to that challenge,  and finally plotting the seduction of his wife whom he assumes will be open and inviting to his advances. But throughout the story he’s met with challenges to his intentions, even what he might consider in his solipsistic perspective as mutinous waves of opposition.

The greatest mutiny comes from his own wife who does not “[feel] the impetuous desire that was in him” and who does not feel “the yielding mood …come upon her” when they get to the hotel room (218). Instead she mutinies, like Sinann seeking knowledge, with the story of her past, what until now has been unknown to Gabriel, that she had a young man in Galway who she “was great with…at that time” and who died for love of her (220). “The Dead” has becomes Gretta’s story by the end, not Gabriel’s. He even feels that “[h]is own identity was fading out into a grey impalpable world: the solid world itself, which these dead had one time reared and lived in, was dissolving and dwindling” (223).

One Response to Shannon Waves