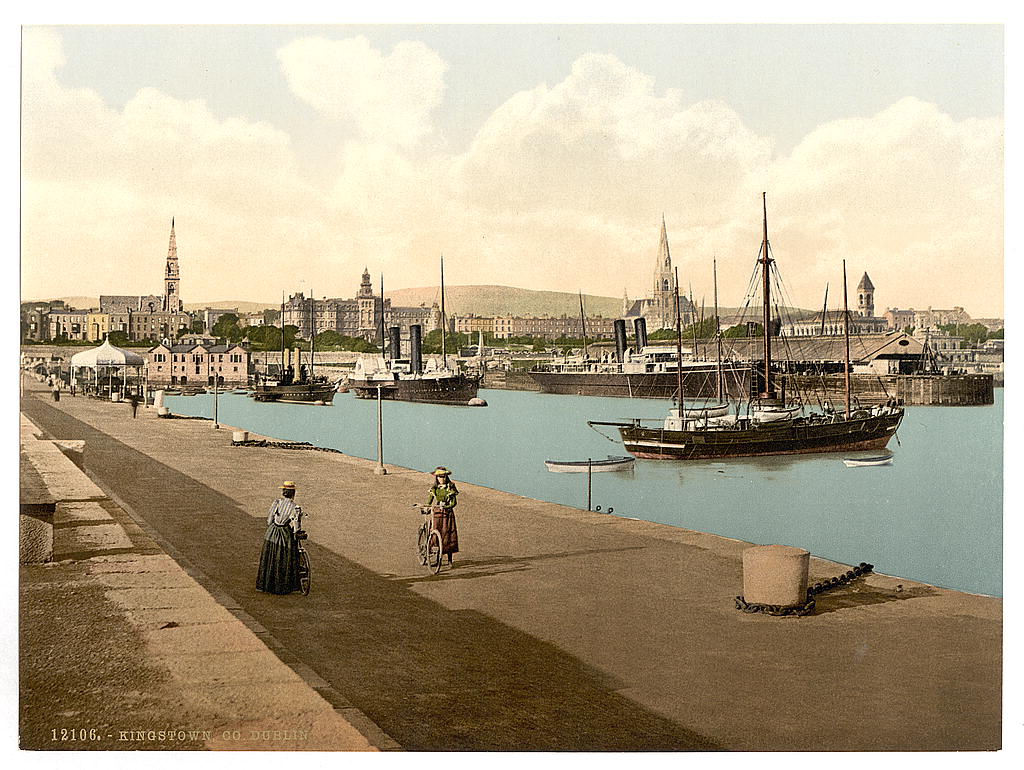 “The Harbor, Kingstown. County Dublin, Ireland” from the Library of Congress http://www.loc.gov/pictures/resource/ppmsc.09881/

This week’s featured place is Kingstown, “a harbour, a town, a sea-front,” that appears several times in Dubliners. The suburban town, southeast of the city center, was called Kingstown only from 1821 to 1920. Today, it’s called Dún Laoghaire. It’s first mentioned in “After the Race,” as the place where Jimmy Doyle’s father “had made his money as a butcher in Kingstown and by opening shops in Dublin and in the suburbs he had made his money many times over” (43). It’s also the setting for the late night party on Farley’s yacht: “They took the train at Westland Row and in a few seconds, as it seemed to Jimmy, they were walking out of Kingstown Station…It was a serene summer night; the harbour lay like a darkened mirror at their feet…They got into a rowboat at the slip and made out for the American’s yacht. There was to be supper, music, cards” (47).

The town is close to Monkstown, where Gabriel and Gretta of “The Dead” live. Many of Mary Jane’s student’s, we learn, live, if not in Kingstown, between Dublin center and Kingstown: “Many of her pupils belonged to the better-class families on the Kingstown and Dalkey line” (176). Gabriel & Gretta opt to stay in a Dublin hotel rather than make the long trek back to Monkstown after the party, but what of Mary Jane’s students? And the crew in “After the Race” reach Kingstown “in a few seconds.” Ah youth!Of course, many factors could be at play here. In “The Dead” it’s winter, and Gabriel is worried about Gretta catching cold like she had the previous year during the cab ride home. The fact that they would be taking a cab rather than a train is most likely attributable to the train schedule and the timing of the party. They leave the aunts’ house in the early morning hours, and the train would have certainly have stopped running, from the Westland Row station by then.