While Milan and the Irish College, both located in Italy, are mentioned by name and thus discussed in elsewhere in this project, Dubliners also contains reference to the country of Italy in a (seemingly) more general sense. The reference appears in “Eveline,” in relation to the title character’s memory of her parents:

“Down far in the avenue she could hear a street organ playing. She knew the air. Strange that it should come that very night to remind her of the promise to her mother, her promise to keep the home together as long as she could. She remembered the last night of her mother’s illness; she was again in the close dark room at the other side of the hall and outside she heard a melancholy air of Italy. The organ-player had been ordered to go away and given sixpence. She remembered her father strutting back into the sickroom saying:

“Eveline” is a comparatively brief story unique in its breadth of non-Irish references. Making sweeping allusions to places as immense as Canada and Patagonia, and as far removed as Melbourne, Joyce balances this story of one young woman’s geographic constriction against a taunting array of exotic and often foreboding locations.

While Italy is not so exotic a reference as others in this story, Joyce’s use of it in this particular context presents several interesting implications. Perhaps the most obvious of these is the irony of the Italian emigrant in Ireland juxtaposed with Joyce’s own status as an Irish emigrant in Italy shortly after the story’s initial publication in The Irish Homestead on September 10, 1904. It would worth further study to determine if this preliminary version included the reference to Italy or if that was added to the final version published with the rest of the stories in 1914 after Joyce had spent considerable time in both Trieste and Rome. Regardless of the timing of the reference in the story’s publication history, the prejudice Eveline’s father exhibits in his condemnation of the immigrants “coming over here!” is important enough to stick in her memory years later, and perhaps this prejudice factors in to her paralysis when it comes time to board the ship and become, herself, an immigrant in a foreign land who will undoubtedly face similar reactions from the natives of her new home in Buenos Ayres.

But Joyce embeds a far less obvious connotation in the reference to Italian immigrants and their music. First, the street organ Eveline hears (represented in the above video) was a common instrument played by wandering musicians during the nineteenth and early twentieth century. Often associated with poor Italian immigrants, their music filled city streets, and many residents complained to the extent that these barrel organs were outlawed in some cities. Music, of course, plays a significant role throughout Dubliners, and Italian music, opera in particular, is later esteemed  to be some of the best in the world by the music aficionados in attendance at the Morkans’ party in “The Dead.”

But another recurring motif  is transportation. Joyce packs his stories full of boats, carriages, trams, cabs, trains, bicycles, and even motor cars. Many Dubliners make use of public transportation in their perambulations around town and in between suburbs. And it just so happens that a 19th-century Italian immigrant is responsible for implementing the model for such public transit systems. While Italy is explicitly used in the story in reference to street musicians and the style of music they play, by applying some further historical context to the scene, the reference becomes much richer in its implications for Joyce’s ongoing examination of transportation in turn-of-the-century Ireland.

As a 1972 RTE program notes, “The Italians are by far the biggest foreign community in Ireland.” According to the text synopsis of the short film,

“The first Italians to arrive in Ireland came with the Normans. In the 18th century, the stuccodores embellished the Irish Georgian houses. In the 19th century, it was the Italians who gave [the Irish their] first transport system.”

More specifically, it was Carlo “Charles” Bianconi, an immigrant from what is now the Lecco province in northern Italy who introduced Ireland’s first public transportation service in 1815. According to Samuel Smiles’s 1890 Men of Invention and Industry, a book Joyce may very well have read, Bianconi’s father sent him away to strike out a living with a print-seller bound for London. The print-seller ended up breezing right through that city and instead settled his group of young non-English-speaking apprentices, including Bianconi, in Dublin in 1802. Smiles describes the Dublin the young Italian encountered as rather rowdy:

“Many things struck Bianconi in making his first journeys through Ireland. He was astonished at the dram-drinking of the men, and the pipe-smoking of the women. The violent faction-fights which took place at the fairs which he frequented, were of a kind which he had never before observed among the pacific people of North Italy. These faction-fights were the result, partly of dram-drinking, and partly of the fighting mania which then prevailed in Ireland. There were also numbers of crippled and deformed beggars in every town,—quarrelling and fighting in the streets,—rows and drinkings at wakes,—gambling, duelling, and riotous living amongst all classes of the people,—things which could not but strike any ordinary observer at the time, but which have now, for the most part, happily passed away” (224-25).

(Such a portrait, with its cheery conclusion that all is now peachy, might certainly have reaffirmed Joyce’s compulsion to hold up his “nicely-polished looking glass” [Letters I 64] for “that hemiplegia or paralysis which many consider a city” [Letters I 55].) 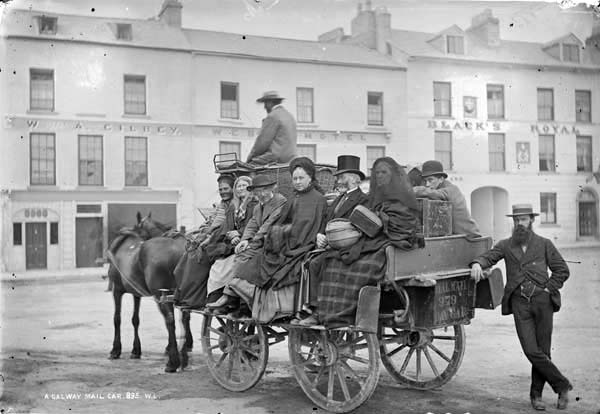 Galway Mail Car, photographed by Robert French between 1880 and 1900. The carriage pictured is a mail car, or “Bian,” used for public transportation in the 19th century. From the National Library of Ireland’s Lawrence Photograph Collection, reproduced in the Irish Times article “Charles Bianconi and the ‘Ryanair of the 19th century’.”

After he finished his apprenticeship, Bianconi spent several years exploring Ireland on his own, and in part because of all the walking he did, in 1815 he implemented Ireland’s first organized horse-drawn transit system. The vehicles operated on a regular schedule throughout the 19th century even after the railway system was introduced. An 1835 Leigh’s New Pocket Road Book of Ireland lists timetables for “Bianconi’s Royal Mail Day Cars,” which shortened trips that may have taken up to eight hours by boat down to just two hours by horse-drawn coach. In an Irish Times article, Aoife Valentine explains,

“The first trip on his open-top horse-drawn carriage took passengers from Clonmel to Cahir on July 6th, 1815. Both towns are on the River Suir, in Co Tipperary, but travel by water meant a journey of more than 38km; by land it was only 16km. Today the same journey is a 20-minute drive; then, most people’s only option was to walk.”

As the first story in the adolescence sequence of Dubliners, the kinds of transportation implied by the mention of Italian emigrants and explicitly referenced in Frank’s association with the steam-ship trade industry as a sailor for the Allan Line are still firmly rooted in 19th-century methods. Fittingly, though, the following story, “After the Race,” illustrates an evolution of those methods in its foregrounding of motor cars as the latest in transportative advancements.