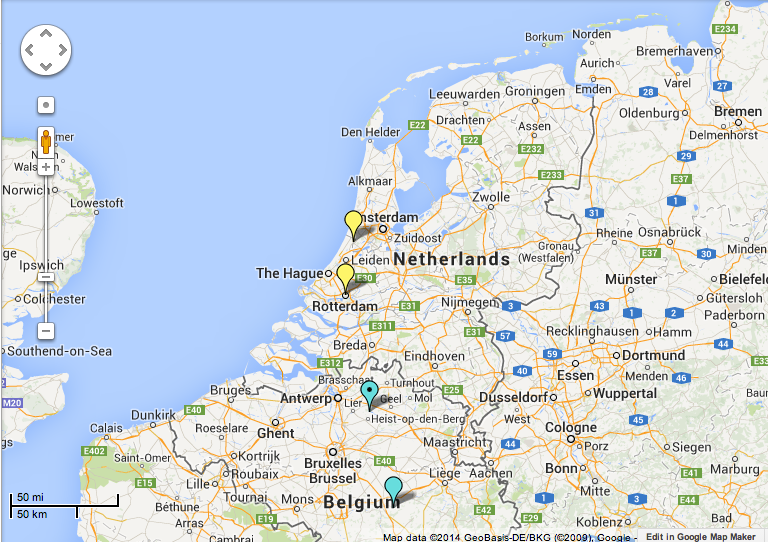 Screenshot of the Dubliners map showing Holland and Rotterdam (and the two Belgium references to the south from “After the Race” and “The Dead.”)

Holland, which, technically, is a name referring only to two provinces of the Netherlands, appears in “A Painful Case” in rather a painful context. Its first mention is innocuous enough:

[Emily Sinico’s] husband was captain of a mercantile boat plying between Dublin and Holland; and they had one child. ()

But the second mention of the place, in the more specific instance of “Rotterdam,” reveals the sense of tragedy or despair that Joyce would come to associate with the country later in his life. According to the story, Mr. Sinico is in Rotterdam when he hears of his wife’s untimely death:

He was not in Dublin at the time of the accident as he had arrived only that morning from Rotterdam. ()

That Joyce has poor Mr. Sinico located in Holland when his wife is hit by a train is presciently appropriate given Joyce’s own string of unfortunate experiences in the country. David Pascoe describes these experiences in the introduction to the program for the XXIV International James Joyce Symposium (where Mapping Dubliners Project is giving a presentation this week) in Utrecht, Netherlands:

Joyce visited the Netherlands, on vacation, in the late spring of 1927…[H]e took in Zaandem (where, oddly, on visiting a small museum, and signing the visitors book, he stated his place of residence still as Dublin); The Hague (where he was attacked by a dog on the ‘wild and endless’ beach, at Scheveningen and broke his glasses); and Amsterdam (where, staying at the Hotel Krasnapolsky, he spent Bloomsday in bed with a cold, and, from his window, overlooking Dam Square, he saw a bolt of lightning strike the glorious Nieuwe Kerk).

The Dutch, like the British, had (and still have) their own colonies around the world, and Joyce would certainly have recognized it as another inescapable colonizing European force.