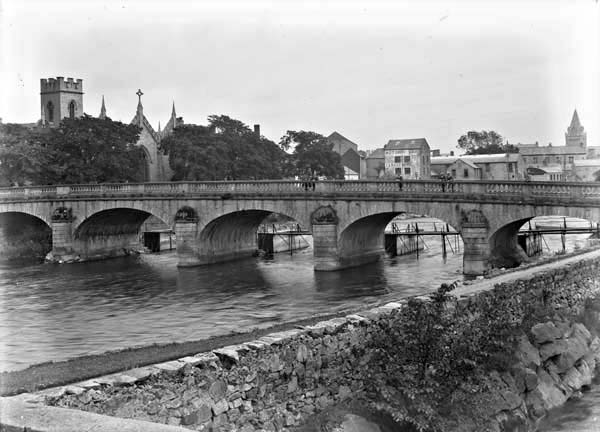 Salmon Weir Bridge, Galway City, Co. Galway, photographed by Eason and Son between 1900 and 1939. From the Eason Photographic Collection at the National Library of Ireland.

Though mentioned six times in Dubliners, Galway appears in only one story: “The Dead.” The city, also the name of the county in western Ireland where it’s located, is the former home of Gretta Conroy, Gabriel’s wife. Fittingly, it is Gretta that makes first mention of the place, even though the general area has already been introduced within the context of the rather heated exchange between Gabriel and Molly Ivors. After a tense session of lancers during which Miss Ivors calls Gabriel a West Briton and scolds him for preferring to vacation on the continent rather than explore his own country, Gretta asks her husband what all the trouble was about:

“–There were no words, said Gabriel moodily, only she wanted me to go for a trip to the west of Ireland and I said I wouldn’t.

His wife clasped her hands excitedly and gave a little jump.

You can go if you like, said Gabriel coldly.

She looked at him for a moment, then turned to Mrs. Malins and said:

The couple’s very different reactions to and moods associated with the west of Ireland embodied in this scene become more complex throughout the story. For Gabriel the west of Ireland in general represents the disconnection he feels from his own geography. He feels disassociated from much of his political and intellectual surroundings, and the exchange with Miss Ivors makes it apparent that he can’t escape that conflict.

To Gretta, the reference has a completely different effect and meaning. It initiates a series of reminders, that manifest throughout the night, of her past and another life. Like Joyce’s wife, Nora, Gretta grew up in Galway. It’s indicated in Joyce’s and Nora’s biographies that Nora had several relationships during her time in Galway before moving to Dublin to escape an abusive family. Two young men in particular, Michael Feeney and Michael Bodkin, are noted as possible models for Gretta’s Michael Furey, “a person [she] used to know in Galway when [she] was living with [her] grandmother” (218). 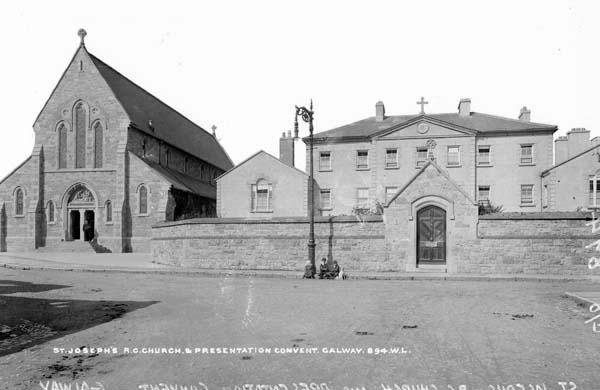 St. Joseph’s Chapel & Presentation Convent, Galway City, Co. Galway, where a young Nora Barnacle was sent after her parents separated. Photographed between 1865 and 1914 by Robert French. From the Lawrence Photograph Collection at the National Library of Ireland.

When Gretta first reveals to Gabriel that she’s been remembering an old flame from Galway, he’s shocked and upset:

–I used to go out walking with him, she said, when I was in Galway.

A thought flew across Gabriel’s mind.

–Perhaps that was why you wanted to go to Galway with that Ivors girl? he said coldly.” (219)

But he soon learns there is much more to the story and becomes sympathetic though no less shocked and disturbed. Not only did the young man die, Gretta reveals, she believes that Michael Furey died for love of her:

“–It was in the winter she said, about the beginning of the winter when I was going to leave my grandmother’s and come up here to the convent. And he was ill at the time in his lodgings in Galway and wouldn’t be let out, and his people in Oughterard were written to. He was in decline, they said, or something like that. I never knew rightly.” (220)

“–And then when it came to the time for me to leave Galway and come up to the convent he was much worse and I wouldn’t be let see him so I wrote him a letter saying I was going up to Dublin and would be back in the summer, and hoping he would be better then.

She paused for a moment to get her voice under control, and then went on:

–Then the night before I left, I was in my grandmother’s house in Nuns’ Island, packing up, and I heard gravel thrown up against the window. The window was so wet I couldn’t see, so I ran downstairs as I was and slipped out the back into the garden and there was the poor fellow at the end of the garden, shivering.

–And did you not tell him to go back? asked Gabriel.

–I implored of him to go home at once and told him he would get his death in the rain. But he said he did not want to live. I can see his eyes as well as well! He was standing at the end of the wall where there was a tree.

–And did he go home? asked Gabriel.

–Yes, he went home. And when I was only a week in the convent he died and he was buried in Oughterard, where his people came from. O, the day I heard that, that he was dead!” (221)

Though Galway has its share of political, historical, and mythological resonance, its appearance in Dubliners is more biographical than anything else. Joyce’s reference to it is primarily a very direct parallel to his own experience and associations with the place in the context of his relationship with Nora. As Gordon Bowker puts it, the death of Nora’s lover “haunted her thereafter and came to haunt also the man she eventually married” (122).

Nevertheless, that Galway is situated in the west of Ireland works perfectly for the conflict that Joyce sets up in the story between west and east, Ireland and England, preserving the past and moving toward a new progressive and global age.