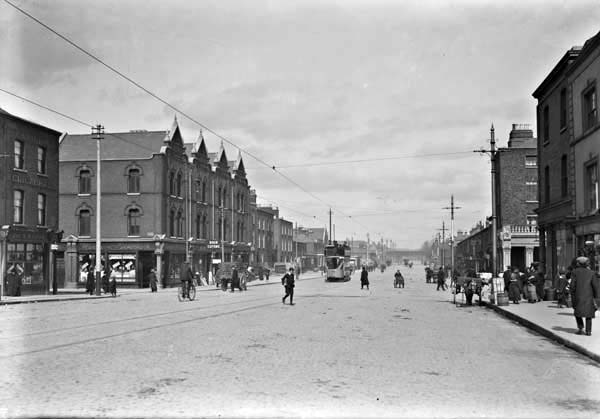 Dorset Street, facing north toward Drumcondra. Photograph, created between 1900 and 1939, is from the digitized Eason Photographic Collection at the National Library of Ireland.

Though it’s the second place referenced in “Two Gallants,” Dorset Street is the beginning of a long circuitous walking route that winds through the story. In the opening paragraphs we find Lenehan and Corley walking along Rutland Square on an August evening. Following a scrupulous description of Lenehan’s appearance and sampling of his conversation style, we learn that “[h]is tongue was tired for he had been talking all the afternoon in a public-house in Dorset Street” (50). Don Gifford’s commentary on the reference is simply that the men “would have had their choice of at least fourteen or fifteen pubs on the street in 1903” (55). Indeed both an 1892 and a 1909 Thom’s Directory list several wine, beer, and spirit merchants as well as victuallers that may have hosted the men. A few of these persisted over the seventeen-year span and no doubt others came and went in between. (And as soon as we can get a digital edition of Thom’s 1904, researchers will have access to more precise information no matter where they are based.)

Dorset Street, known prior to the nineteenth century as Drumcondra Lane, runs diagonally through the north side of the city fromDominick Street in the southwest to the Canal Bridge in the northeast.  Upper Dorset Street (which is actually the southern half of the stretch) was populated by a wider variety of public houses and is closer to Rutland Square than Lower Dorset, so we might speculate that the vicinity between Dominick and Hardwicke Lane is indeed where the men have spent the afternoon and where they start their trek south toward the city center. This would put them at the start of their journey in the vicinity of St. George’s church and Mrs. Moody’s boarding house, which is in Hardwicke Street, the setting of the story following “Two Gallants.” The return to the setting of the opening of “Two Gallants” in the beginning of “A Boarding House” takes the circuitous path of the previous story beyond that story’s frame and injects something else into the way we read the opening description of Mrs. Mooney. 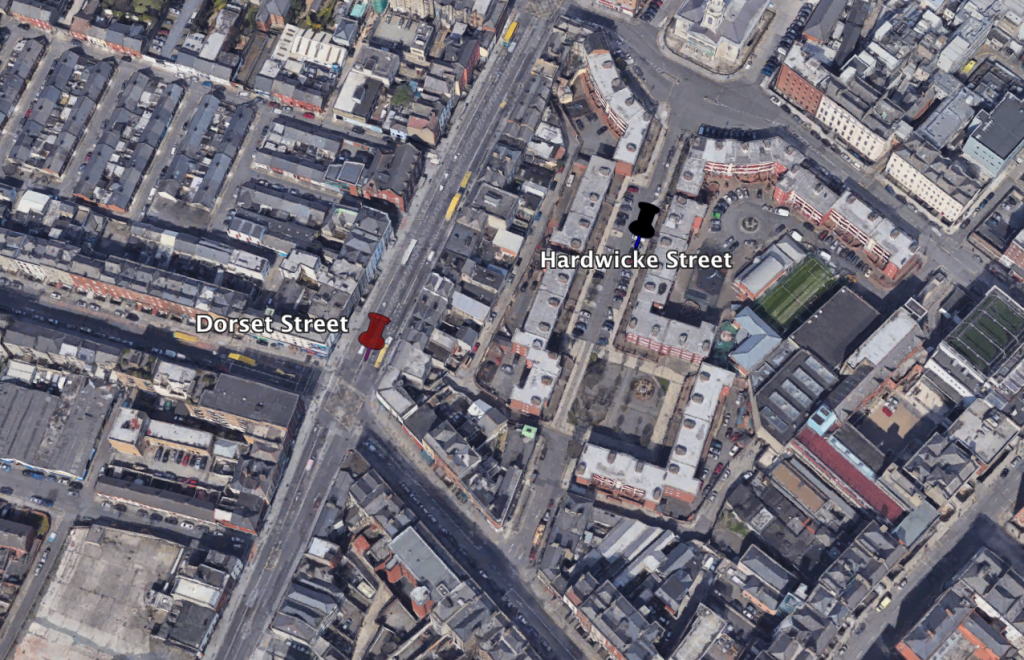 The stories share an approximate opening setting, but they also share a similarity of character relationships and motivations. Corley, like Mrs. Mooney, is an opportunist. And Lenehan, like Polly, is a willing participant in the other’s scheme. Completing the parallel trinities are Corley’s female companion and Bob Doran, both of whom are caught, not without some fault of their own, in the self-serving designs of the opposite sex. While this comparison could be drawn without a map, the added geospatial element introduces a kind of metaphoric utility to the movement in both stories. While the young men travel great distances, Corley by tram and Lenehan by foot, to achieve their goal, Mrs. Mooney only leaves her house to “catch short twelve in Marlborough Street” before she completes her task. In effect, Mrs. Mooney’s path, both social and geographic, is much more direct, while Lenehan and Corley’s is much more elaborate. The two young men must divide up so that Corley can get close enough to his girl to gain her trust and thus her charity. Meanwhile Lenehan must wander rather aimlessly, tracing circles through the city as he ponders his position in life.

The contrast could be a gender commentary by Joyce, but that commentary is a complex one. Is Mrs. Mooney more shrewd than Corley or more manipulative? Is Corley more willing to go out of his way for what he wants than Mrs. Mooney, or is he simply lacking the ability to apply his skills in more efficient ways? Mrs. Mooney is “sure she would win” while Corley “know[s] the way to get around [his target].” Both have confidence in their proficiency at manipulation, and both are ultimately successful. Mrs. Mooney just seems able to “pull it off” with less ambulatory effort.