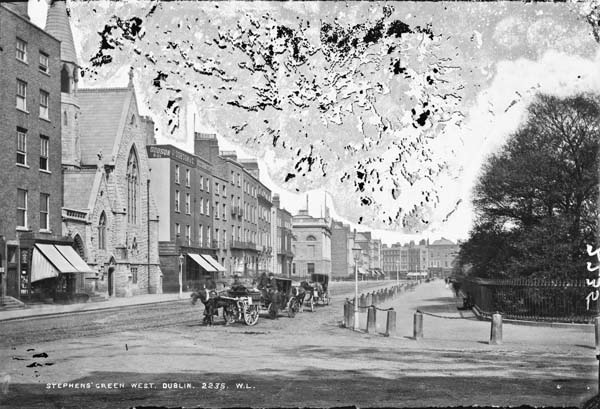 The location of Dan Burke’s Stephen’s Green location is seen at the bottom left of the photograph. Image from the National Library of Ireland’s digitized Lawrence Photograph Collection. Photo by Robert French, published 1865-1914.

Dan Burke’s is named in “A Painful Case” as Duffy’s go-to lunch spot in the city. Although he lives in Chapelizod, he works in the city center, at a bank in Baggot Street, and must therefore find sustenance near his office:

“He had been for many years cashier of a private bank in Baggot Street. Every morning he came in from Chapelizod by tram. At midday he went to Dan Burke’s and took his lunch—a bottle of lager beer and a small trayful of arrowroot biscuits. At four o’clock he was set free. He dined in an eating-house in George’s Street where he felt himself safe from the society of Dublin’s gilded youth and where there was a certain plain honesty in the bill of fare” (108-109). 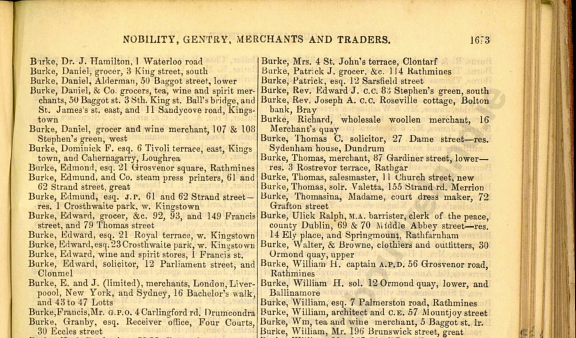 According to Thom’s 1892 Directory (pictured above), Daniel Burke and Co., “grocers, tea, wine and spirit merchants,” had establishments at 50 Lower Baggot Street, as well as St. James Street East, 3 King’s Street South, Ballsbridge, 11 Sandycove Road, and 107 and 108 Stephen’s Green West. A previous directory published in 1883 (embedded below; see left column near top) also lists Daniel Burke as “grocer, tea, wine and spirit merchant” in several of the same locations. An established and expanding business with stores located around the city, Dan Burke’s would have been to Duffy a reliable establishment that appealed to his regard for consistency and order.

Duffy’s appreciation of Dan Burke’s consistency is echoed in his always ordering the same arrowroot biscuits (or cookies, for American readers) and bottle of lager. Arrowroot biscuits differ from the traditional kind in that they are made with the naturally gluten-free arrowroot instead of wheat flour. In fact, the 1920 entry in the Encyclopedia Americana describes arrowroot as “a fine-grained starch esteemed for making desserts and invalid foods.” The entry also explains that arrowroot was particularly popular in Victorian Great Britain as it was produced in British colonies. True to his sensitive character, Duffy seems drawn to a consistent and gentle diet, opting away from gluten and stout in favor of the gentler and lighter fare Dan Burke’s offers. That it’s located in the same street as his office makes it a convenient as well as efficient choice for a midday meal.
Tagged with: a painful case