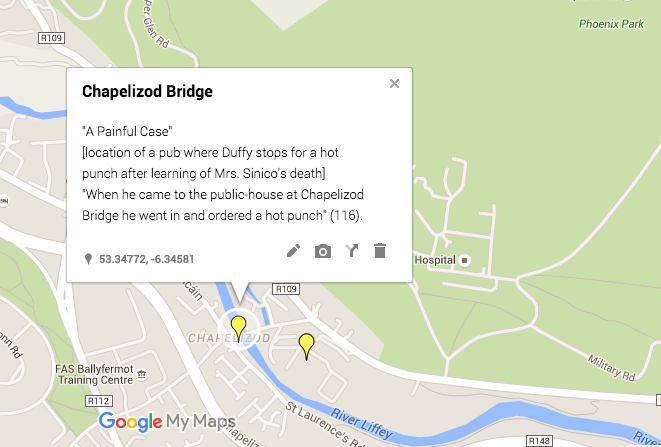 Screenshot of the Google Maps version showing the Chapelizod Bridge.

Very few of the Dubliners stories contain settings very far from the city center. The most significant deviation from this norm is “A Painful Case,” which features the suburb of Chapelizod as the main character’s place of residence. The opening of the story announces this setting in tones much like those of the central character Duffy himself:

“MR. JAMES DUFFY lived in Chapelizod because he wished to live as far as possible from the city of which he was a citizen and because he found all the other suburbs of Dublin mean, modern and pretentious. He lived in an old sombre house and from his windows he could look into the disused distillery or upwards along the shallow river on which Dublin is built” (107).

“He had been for many years cashier of a private bank in Baggot Street. Every morning he came in from Chapelizod by tram. At midday he went to Dan Burke’s and took his lunch — a bottle of lager beer and a small trayful of arrowroot biscuits. At four o’clock he was set free. He dined in an eating-house in George’s Street where he felt himself safe from the society of Dublin’s gilded youth and where there was a certain plain honesty in the bill of fare” (108-109).

But on one particular evening, after his routine has been interrupted by the news of his friend Emily Sinico’s death, he visits a different public house, one much nearer his home than his usual haunts. Though Duffy initially reads of his friend’s demise in the paper in his George’s Street eating house, he has to go elsewhere to process the news. First he goes home to Chapelizod where he rereads the story by the dim light of his bedroom window, which overlooks the Lucan road, the distillery, and the Liffey. He becomes unsettled and nervous and leaves his house to get some fresh air:

“The cold air met him on the threshold; it crept into the sleeves of his coat. When he came to the public-house at Chapelizod Bridge he went in and ordered a hot punch.

The proprietor served him obsequiously but did not venture to talk. There were five or six workingmen in the shop discussing the value of a gentleman’s estate in County Kildare They drank at intervals from their huge pint tumblers and smoked, spitting often on the floor and sometimes dragging the sawdust over their spits with their heavy boots. Mr. Duffy sat on his stool and gazed at them, without seeing or hearing them. After a while they went out and he called for another punch. He sat a long time over it. The shop was very quiet. The proprietor sprawled on the counter reading the Herald and yawning. Now and again a tram was heard swishing along the lonely road outside.

As he sat there, living over his life with her and evoking alternately the two images in which he now conceived her, he realised that she was dead, that she had ceased to exist, that she had become a memory. He began to feel ill at ease. He asked himself what else could he have done. He could not have carried on a comedy of deception with her; he could not have lived with her openly. He had done what seemed to him best. How was he to blame? Now that she was gone he understood how lonely her life must have been, sitting night after night alone in that room. His life would be lonely too until he, too, died, ceased to exist, became a memory — if anyone remembered him” (116).

It takes a change of scenery for Duffy to feel sympathy for his friend, whom only shortly before he had perceived as “unfit to live, without any strength of purpose, an easy prey to habits, one of the wrecks on which civilisation has been reared” (115). He had been appalled, in fact, when he first learned of her death. But once he is in the pub near his house, drinking hot punch on a cold November night, he feels much closer to her and regrets that neither one of them could fill the loneliness they both felt in life. Though she was married, her husband was often abroad and Duffy had been the closest thing to a companion she had had. She also had been comforting to him, an unmarried though not necessarily unromantic man who seems unwilling to confront his sensual potential.

That the name of Chapelizod invokes the love story of Tristan and Iseult only adds to the depth of his despair at realizing Mrs. Sinico is gone. Perhaps it is the unnamed pub only distinguished in the story by its location at the Chapelizod bridge, with its connotations of romance and history, that offers Duffy the ability to feel tenderly.

The pub itself is identified by Don Gifford as the Bridge Inn. Although the current Bridge Inn’s website claims it wasn’t built until 1911, the 1900 Thom’s Directory clearly lists a Mr. T. Walker, grocer, wine and spirit merchant, at Bridge Inn in the south side of Chapelizod (see bottom middle column in the screenshot below). The Bridge Inn, just on the south bank of the Liffey is not the same pub as the famous Mullingar’s featured in Finnegans Wake, and which was a favorite spot of Joyce’s father John who knew the owner there, Robert Glenthorn Broadbent, also listed in the directory below. 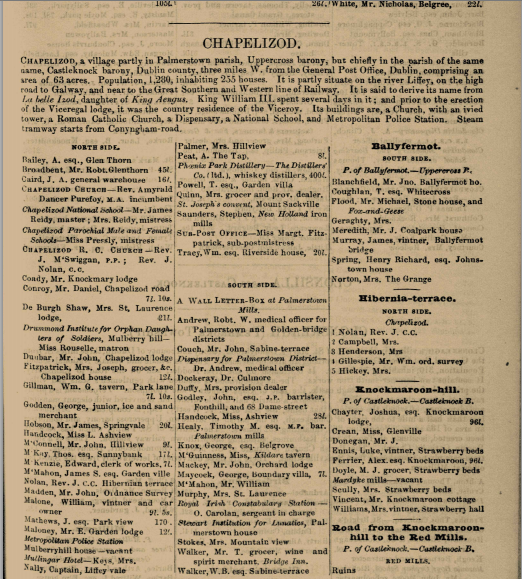 Screenshot of a digitized 1900 Thom’s DIrectory. The page shows entries for Chapelizod. Note Mr. T. Walker of Bridge Inn near the bottom of the middle column. Also, note Mr. Robt. Glenthorn Broadbent at the top left. He is purportedly a friend of Joyce’s father, John Joyce. Broadbent ran the Mullingar House, another Chapelizod pub, which features in Finnegan’s Wake. Directory made available online by South Dublin County Libraries, http://source.southdublinlibraries.ie/handle/10599/5101

Tagged with: a painful case