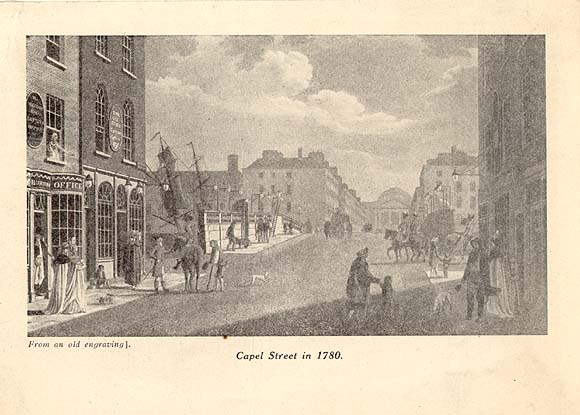 Capel Street in 1780, “from an old engraving.” From the National Library of Ireland’s digitized prints-and-drawings collections.

Capel Street, a typical yet rather non-exceptional shopping thoroughfare just a few blocks west of O’Connell Street in Dublin city center, appears in both “Two Gallants” and “A Little Cloud.” In both stories, it serves as an artery moving the focal characters from north to south as they walk through the city. For Lenahan in “Two Gallants,” Capel Street is one line amid a mostly destinationless perambulation, a trek that serves to pass the time while his friend Corley is engaged with his lover. And for Chandler in “A Little Cloud,” the street is one section of a mostly direct route from his office in Henrietta Street to Corless’s where he’ll meet his successful London-based friend Gallaher who is in town for a visit. For both men, Capel Street is the setting for a change of attitude.

Capel Street seems only a blip in the timeline of Lenehan’s wandering:

“He paid twopence halfpenny to the slatternly girl and went out of the shop to begin his wandering again. He went into Capel Street and walked along towards the City Hall. Then he turned into Dame Street” (58).

But it is part of a series of stretches and turns that accompany an important internal review for the thirty-year-old gallant. The lines just before the Capel Street reference show Lenehan eating a plate of peas at a pub (likely in Great Britain Street) while he considers his life, first hopelesslessy and then a little more optimistically:

“He would be thirty-one in November. Would he never get a good job? Would he never have a home of his own? He thought how pleasant it would be to have a warm fire to sit by and a good dinner to sit down to. He had walked the streets long enough with friends and with girls. He knew what those friends were worth: he knew the girls too. Experience had embittered his heart against the world. But all hope had not left him. He felt better after having eaten than he had felt before, less weary of his life, less vanquished in spirit. He might yet be able to settle down in some snug corner and live happily if he could only come across some good simple-minded girl with a little of the ready” (58).

The next glimpse we get into Lenehan’s mind is when he meets his firends at the corner of Dame and George’s Streets.But what occupies his mind for the 5 minutes the map indicates it would take him to traverse Capel Street and the additional 5 minutes it would have taken to cross Grattan Bridge, continue down Parliament Street, and then wander east along Dame street to the corner? Have the peas truly placated him, stopping all analysis and self-reflection? The exchange with his firends at the corner is described very matter-of-factly, listing the questions and answers without any embellishment of accompanying emotion besides that “[h]e was glad that he could rest from all his walking” (58). It would seem he’s also relieved to have a distraction from his self-doubts. He would rather gossip with fellow drinkers and drifters than examine his own failings and shortcomings. Indeed, it seems that after he resolves to become “less weary of his life, less vanquished in spirit,” all thought must stop lest it return to the realism of his age and lack of love or vocation.

Chandler, who is more mature than Lenehan (partly evidenced by his habitation of a maturity story rather than an adolescence story), doesn’t stifle his thoughts as he traverses Capel Street. Rather, the 7 minutes it would take him to walk from the corner of Henrietta and Capel Streets to Grattan Bridge appear in the text as paragraphs packed full of reflection.

“He turned to the right towards Capel Street. Ignatius Gallaher on the London Press! Who would have thought it possible eight years before? Still, now that he reviewed the past, Little Chandler could remember many signs of future greatness in his friend. People used to say that Ignatius Gallaher was wild. Of course, he did mix with a rakish set of fellows at that time, drank freely and borrowed money on all sides. In the end he had got mixed up in some shady affair, some money transaction: at least, that was one version of his flight. But nobody denied him talent. There was always a certain … something in Ignatius Gallaher that impressed you in spite of yourself. Even when he was out at elbows and at his wits’ end for money he kept up a bold face. Little Chandler remembered (and the remembrance brought a slight flush of pride to his cheek) one of Ignatius Gallaher’s sayings when he was in a tight corner:

–Half time now, boys, he used to say light-heartedly. Where’s my considering cap?

That was Ignatius Gallaher all out; and, damn it, you couldn’t but admire him for it.

Little Chandler quickened his pace. For the first time in his life he felt himself superior to the people he passed. For the first time his soul revolted against the dull inelegance of Capel Street. There was no doubt about it: if you wanted to succeed you had to go away. You could do nothing in Dublin. As he crossed Grattan Bridge he looked down the river towards the lower quays and pitied the poor stunted houses” (72-73).

The movement from north Dublin to south tranforms Chandler. He becomes more confident as “every step brought him closer to London, farther from his own sober, inartistic life” (73). So what is it about Capel Street that advances confidence or at least has the power to quiet self-doubt? What sights and sounds would have populated Lenehan and Chandler’s walks down this innocuous commercial corridor? 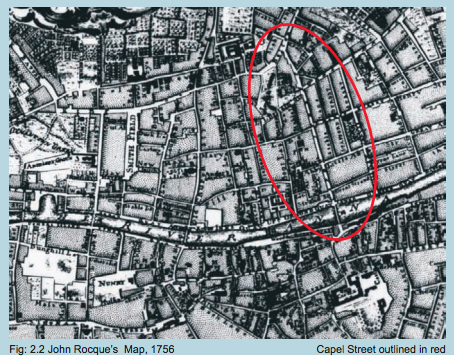 John Rocque’s 1756 map, as reproduced and augmented with red border showing the Capel Street are by the Dublin City Council in its CAPEL STREET & ENVIRONS ARCHITECTURAL CONSERVATION AREA ( ACA ) report.

First, Capel Street is only one of two explicit references (along with Dame Street) the two stories share even though an implicit path is also common. So although the shared change of heart both men experience on their Capel Street walks suggests a kind of parallel characterization, their similar experience is perhaps more a product of the location itself than any similarity of personality. As a commercial artery, Capel street is and was a place of common utility for many Dubliners. A Dublin City development plan describes the street as “one of the most historically significant streets in Dublin City. The street formed part of an extension of the city north of the river by Sir Humphrey Jervis who built his estate on the lands of St. Mary’s Abbey. In 1676 Jervis built a new bridge, Essex Bridge [later renamed Grattan Bridge], which established Capel Street as one of the main thoroughfares between the north and south sides of Dublin City” (1). The report explains that “Capel Street was originally planned in the 17th Century for residential use,” and for a time it indeed “became one of the most fashionable addresses” (2). But the area was repurposed in the eighteenth century for commerce. The report continues, “Capel Street took on the its current appearance we see today during the 19th century. During this period retail became prominent on the street so that domestic houses at the top lost their front doors and railings to make way for shopfronts” (4). It wasn’t until the past century that “the Capel Street area was subject to urban decay” and the necessity arose to implement a plan to preserve its historic features.

A recent photograph from a local Dublin tourism and business website. The view is the same as the initial image above, over 300 years later.

Capel Street was well established but already in the early stages of its decay during the time period in which Dubliners is set. Perhaps the comfortable and long-cemented bustle served as a kind of reassuring diversion from Lenehan’s perceived individual shortcomings. And for Chandler, “the dull inelegance of Capel Street” filled the role of inferior metropolis necessary to bolster his own imagined sense of superior displacement. More specifically, the inelegance Chandler perceived became a theme for the art he could create outside of Dublin. In both cases, the moments spanned on Capel Street offer a kind of transcendence of spirit while still anchoring their occupants with a kind of inevitability of fortune. It hardly needs to be noted that such co-existence of epiphany and paralysis defines Dubliners, but it is remarkable that this ambivalence can be gleaned through a simple geographical reference shared between two characters on very different paths and in very different stages in life.