As soon as the narrator of “Araby” finally gets some money from his late-arriving uncle, he takes off down Buckingham Street on his way to the bazaar: “I held a florin tightly in my hand as I strode down Buckingham Street towards the station” (34). Buckingham Street is situated just southwest of the narrator’s residence. From his house in North Richmond Street, he must first go southwest into North Circular Road, travel southeast briefly to Summerhill, turn right, and then turn left into Buckingham Street. Once there, he must travel a quarter mile (.4 km) down the entire street until he reaches Amiens Street where the train station is located. 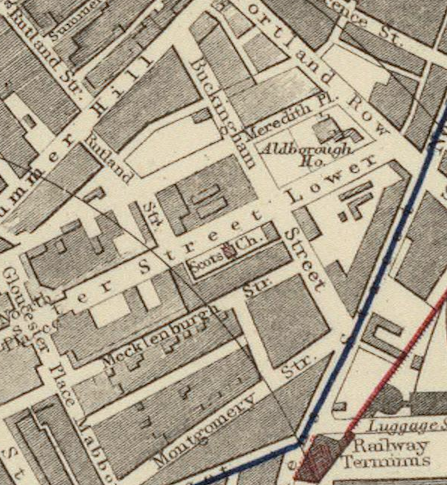 Section of Letts, Son & Co. 1883 Plan of the city of Dublin map showing the entire length of Buckingham Street and the Railway Terminus. Made available at the David Rumsey Map Collection online.

Buckingham Street, Dr. Ruth McManus and Ms. Sinead O’Shea suggest, “represents a microcosm of the city’s development from its initial layout by speculative landowners in the late 18th century ‘golden age’, through its largely middle-class residential status in the 19th century, its demotion to tenement use, then attempted rehabilitation in the late 20th century.” The narrator would have been traveling down this residential street a little after 9pm, and if his uncle is correct, the residents of the houses would have been “in bed and after their first sleep” already (34).

Things might have become a bit more lively as he approached the intersection of Buckingham, Amiens, and Montgomery Streets, though. Montgomery Street was part of “Monto,” the city’s red-light district. Though the boy would not have been in its midst, he would be right on the edge, an appropriate position as he teeters on adolescence. His entire trip, in fact, parallels the movement from childhood to maturity through its increasingly public and complex locations and it evolving modes of transportation (e.g. walking to train riding). Buckingham Street, with its transition from sleeping residents to soliciting women, becomes, to use McManus and O’Shea’s language, a “microcosm” of the revelations the boy experiences in his final epiphany.

One Response to Buckingham Street